An Apple data center planned for the west of Ireland has been delayed for two years. 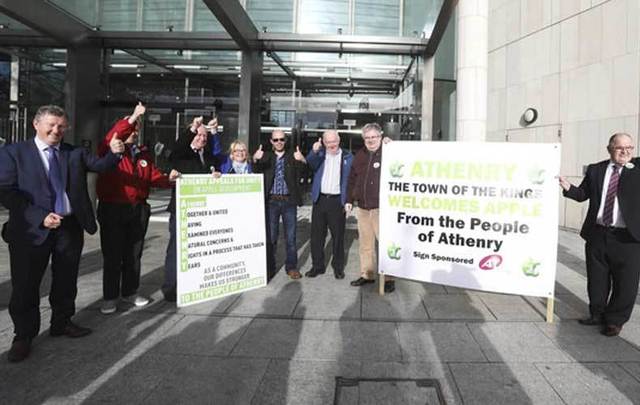 Apple supporters outside the Criminal Court of Justice in Dublin City Center in January 2017. Leah Farrell/RollingNews.ie

In 2015, the tech giant announced plans to build the large facility in Athenry, in the west of Ireland, to take advantage of nearby green energy sources, but the project has been delayed for two years due to planning objections, reports Reuters.com.

Prime Minister Leo Varadkar, on  a trade mission to America's west coast, told RTE that the U.S. company’s Chief Executive Tim Cook would no longer commit to the project.

“We didn’t get a start date, or a definite commitment or anything like that,” said Varadkar, who added that he told Cook that the government would do “anything within our power” to get the data center built.

In February 2015, Apple announced its plans to apply for planning permission from Galway County Council to build the facility in Derrydonnell, near Athenry. It was estimated to cost €850 million to develop the site, which covers a space the size of about 23 soccer fields. The site would provide jobs for between 100 and 150 people upon completion, which was expected to be in 2017, TheJournal.ie reports.

In June of 2015 Galway County Council said it would need more detail from the company about its plans to power the center with renewable energy.

The council granted permission for the center in September. Objections were soon lodged with An Bord Pleanála by eight objectors, who said they were worried about the center’s potential for negative environmental impact.

After holding an oral hearing in May 2016, An Bord Pleanála granted planning permission. Addressing environmental concerns, the body stated that the facility ”would not seriously injure the amenities of the area or of property in the vicinity.”

In October, local residents Allan Daly and Sinead Fitzpatrick, and Wicklow resident and landowner Brian McDonagh, applied for a judicial review of the board’s decision, saying the center could destroy the local forest.

More than 2,000 people rallied in support of the project in November 2016

In February 2017, Brian McDonagh’s objections were dismissed, but Allan Daly and Sinéad Fitzpatrick’s applications for judicial review were successful.

The case was expected to be heard in the Commercial Court in March, but the judgment was reserved and it was anticipated that a final decision would be made by the end of the June. The decision that the plant could go ahead was eventually made on October 12, 2017, but Apple may well have soured on the project.

Read more: Apple told to reveal why they are building new massive plant in secret area in Ireland

At the same time that the data center was announced for Ireland in 2015, Apple also announced a center to be built in Denmark. The Danish center is set to begin operations later this year. In July, Apple announced it would build a second EU data center there.

According to Reuters, the Irish government is considering amending its planning laws to include data centers as strategic infrastructure, thus allowing such projects to get through the planning process more quickly.