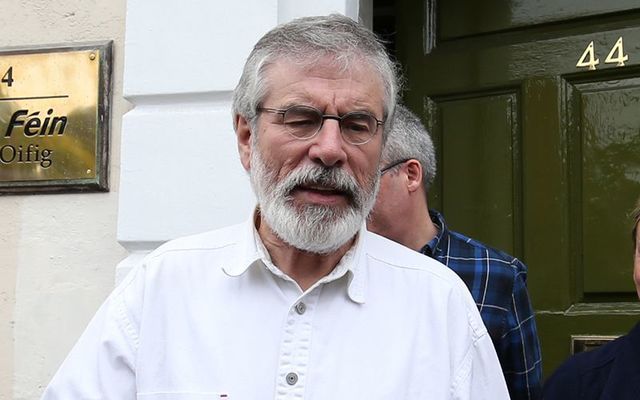 Mallon made what many considered a deeply bitter attack on Adams in February.

“I just can't be in the same room with him," he told the Irish Times. "I don't want to be. I've spent my life getting on with people and liking people that I didn't agree with. There's just something about him that I recoil from. He has his hand in too many awful events, too many."

Adams stated: "Apart from John Hume the SDLP leadership has repeatedly demonstrated an inability to think strategically or to plan for the long term. It thinks in the here and now, in the short term.

"Sinn Féin is an Irish Republican party with progressive social and economic policies and is for a United Ireland. We have a strategy to bring that about.

"The SDLP hold an aspiration for a United Ireland, but has no strategy and no methodology to achieve it. And finally, the SDLP take the Oath of Allegiance to the British Monarch and sit in that Parliament when they have MPs to send there. But last year the electorate in seven nationalist seats voted for Sinn Féin candidates. They turned their backs on Westminster and the SDLP."

"In 2001 John Hume stood down as party leader. No one of his stature has emerged since as SDLP leader..... But unless you are relevant you will fail. Nothing is surer in politics.

“Let’s be clear. The electorate that the SDLP represents will not go away. The anti-Sinn Féin core of its support is diminishing and aging but like Seamus Mallon it is as trenchant as ever.”

Adams added that the SDLP had "a small cadre of young and likeable MLAs" but they are unlikely to change the fortunes of the party.

"Its leaders are now contemplating being absorbed by Fianna Fáil," he said.

This explicit acknowledgement that the party has no future of its own ignores the role it could play with Sinn Féin and others in building a progressive Consensus for Change and Rights for everyone.

"Far from sacrificing itself for the peace process the SDLP, particularly in the absence of John Hume, simply became less relevant, especially to younger voters. They failed to plan for the future."

SDLP leader Colum Eastwood hit back telling the Belfast Telegraph: “It’s interesting that now Gerry Adams has plenty of time on his hands he spends it attacking the SDLP.

Read More: Standing on the shoulders of giants - the mighty legacy of John Hume

“Gerry Adams has delivered nothing for nationalism, instead he has left nationalism in a place where it is powerless. Sinn Fein has gifted the DUP unfettered power over all of our lives.

“What Sinn Fein has consistently failed to understand is that there is no point in having power if you do nothing with it.