Electric Picnic is one of Ireland's biggest and best-known music festivals, but as this year's MindField component once again proved, it's also so much more than a music festival. 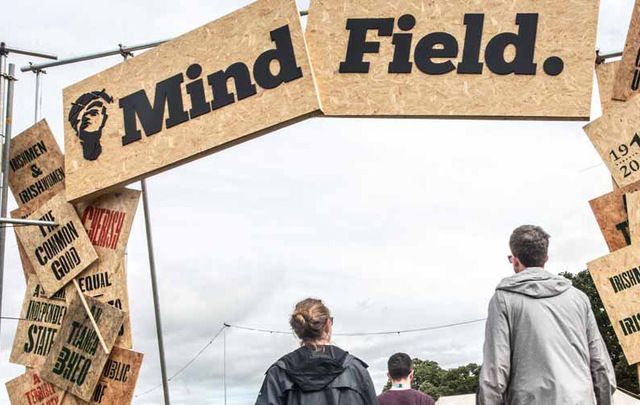 Electric Picnic is one of Ireland's biggest and best-known music festivals, but as this year's MindField component once again proved, it's also so much more than a music festival.

From mental health to spoken word art, from coding to political activism, from the science of our increasingly online world to Irish language entertainment, check out some of the highlights. Read more about the full MindField program here.

For 2017, the ever-popular Leviathan Stage introduced a new format called ILLUMINATE! with the Rubberbandits’ Blindboy Boatclub at the helm. There, Ireland’s leading artists gave illustrated and unique insights into their creative processes and influences.

Author and lauded BBC foreign correspondent Fergal Keane hosted another new addition called My Secret Planet. Dubbed as a cross between radio stalwarts Desert Island Discs and On the Psychiatrist’s Couch, it rooted out the cultural influences of some of Electric Picnic’s most fascinating artists.

Soundings returned with its dynamic mix of live podcast and tunes. Hosts Lisa Hannigan and Dylan Haskins chatted to Saint Sister, among many other special guests. Fresh from his Galway International Film Fleadh, musician and filmmaker Nick Kelly presented a pre-premiere of his award-winning film ‘The Drummer and the Keeper’.

Check out this clip from The Drummer And The Keeper + we have director Nick Kelly for a Q&A on Friday at 18.30 https://t.co/lxkqjGJgty

Broadcaster Miriam O’Callaghan and comedian Al Porter teamed up again for Miriam and Al’s Sunday Brunch – a light-hearted review of the Sunday papers with special guests and music.

There was a special Irish Research Council discussion on the Science of Online Dating, and Paddy Cullivan presented his new political satire show ‘26 + 6 = 1’ about a future United Ireland; Tommy Graham’s History Ireland Hedge School presented two fascinating panels on the 100th anniversary of the Bolshevik Revolution and the 40th anniversary of the Summer of Punk – 1977.

Thank you to @DubTheatreFest for having our #BlackCatfish at the Mindfield Theatre Stage as part of #EP2017. We had a right ball! 💛📱📻📱💛 pic.twitter.com/va7sHPVHTZ

By night, the Theatre Stage played host to an amazing mental health-oriented program assembled by A Lust for Life – Pieta House, winners of the 2016 Social Entrepreneurs Award, together with the Wall of Sound installation in the heart of the MindField arena.

Last chance to make this wall more colourful! Thanks to all those who contributed @ the Mindfield area - we're pretty hard to miss 😉#ep2017 pic.twitter.com/mqvhmYLQ7M

Fíbín set a theatrical stage with their walkabout confessional show, while Brian Fleming performed excerpts from his unforgettable one-man show, 'Gis a Shot of Yer Bongos'. Seán and Niall Mac Donnchadha brought their hilarious survival guide to Ireland to the Puball Gaeilge stage.

Were you one of the lucky festival-goers in attendance at Electric Picnic? Tell us about your experience in the comments!