The Irish Hunger memorial at Penn’s Landing in Philadelphia has declared that bigotry and hatred have no place there after learning that a far-right hate group has used it as a gathering point. 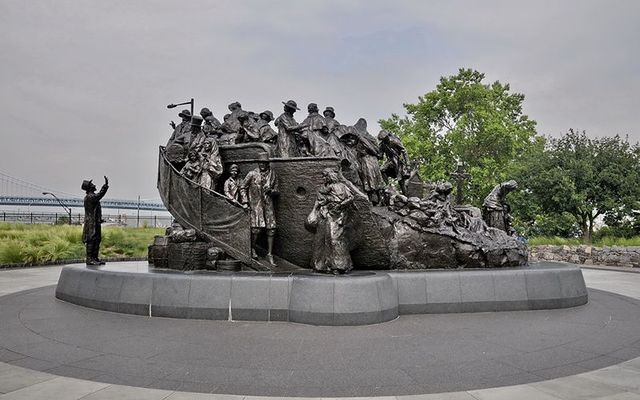 The Irish Memorial at Penn's Landing in Philadelphia Flickr/FaceMePls

The Irish Hunger memorial at Penn’s Landing in Philadelphia has declared that bigotry and hatred have no place there after learning that a far-right hate group has used it as a gathering point.

The leaders behind the Irish Famine Memorial at Penn’s Landing in Philadelphia have issued a strong public statement after learning that the site has been used as a gathering point for white nationalist neo-nazi group the Proud Boys.

A statement shared to the memorial’s Facebook page on Tuesday reads:

It has come to our attention that a group called the Philly Proud Boys Gang has in the past used the Irish Memorial as a gathering area for their Neo-Nazi protest at Independence Hall. The Irish Memorial does not condone this activity and this group is not welcome to congregate here before this week's protest.

While all are welcome to the Memorial, Hate and Bigotry are not.

The memorial, while being the pride of the Irish community, celebrates all nationalities, faiths, colours and creeds and our common experiences as immigrants to America. HATE AND BIGOTRY HAVE NO PLACE AT THE IRISH MEMORIAL.

It has come to our attention that a group called the Philly Proud Boys Gang has in the past used the Irish Memorial as a...

Posted by The Irish Memorial at Penn's Landing on Tuesday, November 13, 2018

The Proud Boys are a far right hate group that espouses anti-Muslim, white nationalist, and misogynist views and supports political violence. It was founded by Vice Media co-founder Gavin McInnes during the 2016 presidential election.

The Irish Memorial, as it is known locally, was constructed in 2002 by Irish sculptor Glenna Goodacre and honors the 1 million who died and the 2 million who immigrated during Ireland’s Great Hunger from 1845-1852, a brutal campaign of deliberate deprivation and starvation on behalf of the British following the failure of Ireland’s potato crops due to blight.

Posted by The Irish Memorial at Penn's Landing on Wednesday, October 24, 2018

As memorial’s website describes, “The monument’s flow depicts the starvation in Ireland, the people embarking for America and then the immigrants stepping onto American shores. The east end, suggesting a landscape, portrays the misery of the Irish Starvation. In contrast, the higher end, suggesting a ship, faces west as anxious immigrants dock in America and a number of figures rush forward in anticipation, full of hope and looking to the future of freedom and opportunity.”

The memorial serves as both a tourist attraction and a place of immense importance to Philadelplia’s Irish community, serving as a place for commemorations, events, and visiting dignitaries.

Thanks to everyone who attended the 16th Annual Commemoration of An Gorta Mór, St.Patrick’s Day, at The Irish Memorial Philadelphia.

Posted by The Irish Memorial at Penn's Landing on Thursday, March 22, 2018

Comments on the memorial’s statement expressed disgust over its use by the Proud Boys and support for the team behind the memorial in their decry against hatred and bigotry:

“My Irish blood is pumping strong and happy that there's no hate allowed at the Irish Memorial.”

“The Memorial is a place for prayer and a material memorial of those who wanted food, freedom and acceptance. Keep the Memorial a place of love. Thanks for posting this.”

“The irony of an anti-immigrant pro-hate group meeting at a memorial that is commemorating the plight of immigrants coming to America for a better life is unreal. I wish they would stop and take in what the memorial represents.”