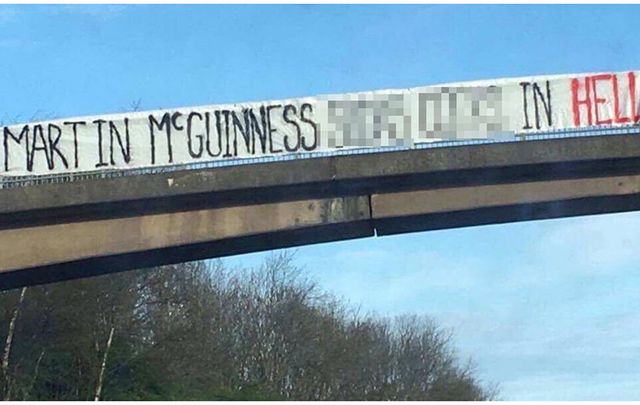 The offensive banner hung by Rangers FC fans above the M8 motorway. RollingNews

Celtic defeated Rangers 2-0 in the Scottish Cup semi-final on Sunday, but it was an obscene banner hung by Rangers fans attacking Martin McGuinness that made the news.

“Martin McGuinness sucks c**** in hell” read the banner, which was placed on a busy overpass, on Sunday morning, in Glasgow before the game. Two more banners saying, “No surrender Rangers F.C” and “Baillieston True Blues WATP” were also hung on the bridge.

Celtic FC, founded by Irish priests, and Rangers, a Protestant club, have been arch enemies since they first met in 1888. In recent years Celtic has been ascendant.

They were posted with the caption: “Banners some Rangers fans have put up in Glasgow this morning.”

Police later confirmed that the banners were removed.

A spokeswoman said “Police were made aware of the banners and they were removed by partner agency.

“There will be no further police action at this time.”

Thousands of people lining the streets of Derry for McGuinness' funeral in March this year.