5,000 nurses from US denied work in Ireland despite huge nursing shortage

Nurses from the US are claiming it's impossible to find the adaptation courses they are being told they must take. 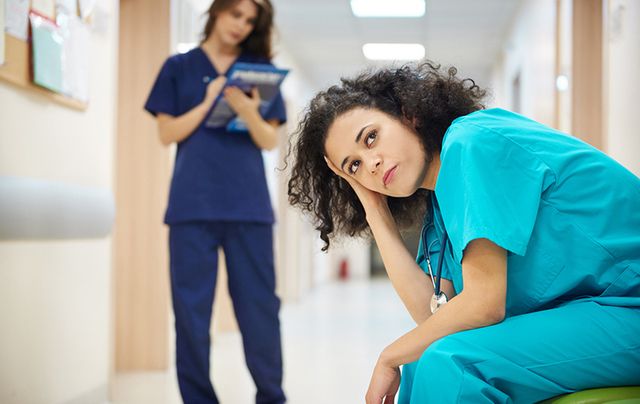 US nurses denied permission to practice in Ireland despite staffing shortages. iStock

Nurses trained in the US are being refused registration to work in Irish hospitals despite a huge staffing shortage.

Up to 5,000 American-trained nurses, including many Irish-born, who have years of professional experience are being told they have been denied access to work in Ireland because they don’t have the correct amount of clinical and theory hours from their studies. Some nurses are told they must take adaptation courses, but nurses say these are nearly impossible to find. The claim that American nurses are not qualified is strongly disputed by placement agencies.

Ireland has a nursing crisis. Nursing staffing levels have dropped by more than 3,000 since 2007, and the national Health Service Executive (HSE) has committed to increasing the nursing and midwifery workforce by more than 1,200 permanent posts this year.

Rebecca Love, a professor at the School of Nursing Northeastern University and founder of American nurse recruitment website HireNurses.com, told TheJournal.ie that she has been in contact with more than 5,000 American nurses who have shown an interest in working in Ireland since last year. She said many of the nurses qualified to work in the U.S. are unable to register for work in Ireland despite Irish hospitals wanting to hire them.

Many of the nurses are being told the reason they are being denied is due to the difference in their clinical and theory hours from their degree, but they are often not told this information until after they have applied at a cost of €425.

However, Love said that after hours of research, she has found that nurses with a Bachelor of Science in Nursing from the U.S. do in fact have the correct theory and clinical hours needed to work in Ireland.

“I believe that there has been a severe misunderstanding and miscalculation of American credit hours to clock hours that may have wrongly denied American nurses access to a nursing license in Ireland,” she said.

The Nursing and Midwifery Board of Ireland (NMBI) is responsible for evaluating applications from overseas nurses who wish to work in Ireland. According to the board’s standards, nurses must have a minimum of 1,533 theoretical hours and 2,300 clinical hours to register.

While many applicants receive a flat refusal from the NNBI, others are being encouraged to take adaptation courses to “make up hours.”

NMBI told TheJournal.ie that “when overseas applicants do not have the required hours for registration, applications are refused or, if they fall slightly below, they may be offered adaptation/aptitude tests to support an application for registration.”

Nurses are provided with a list of NMBI-approved hospitals that can provide the adaptation course or aptitude, but they are not given contact information or told which hospitals are currently carrying out the courses.

Several nurses have claimed they have been unable to find any hospitals that were currently carrying out these adaptation courses.

The NMBI responded to the claim saying: “It is at the discretion of the approved health care facilities as to how they manage adaptation placements and queries regarding the numbers currently on placement in each facility should be directed to those institutions. NMBI has no role in organizing placements.”

The only other option for nurses is a €2,800 two-day aptitude test with the Royal College of Surgeons, but the test is offered only if the college has at least 20 applicants and US nurses who want to move here can’t pre-book a test.

There is also a deadline imposed by the NMBI for overseas nurses attempting to find an adaptation course or pay for an aptitude test.

It says: “A decision letter recommending adaptation/aptitude test is valid for 12 months after the date of decision. If the process has not been completed and NMBI has not had any contact from the applicant for six months, the file is closed.”

George Russell, a director at Irish healthcare recruiting firm Epic World jobs, is currently working with a number of US nurses who are trying to register to work in Ireland.

“Currently I’m working with more than 300 nurses and can get any amount of American nurses if the obstacles at NMBI were out of the way,” said Russell.

“Ireland is very high on their radar and with over three million nurses registered in the US. Ireland’s nursing crisis would be eclipsed by the amount of American nurses that have a desire to work here.

“I think adaptation is a much better idea than taking the RCSI aptitude test. Many foreign nurses wanting to come here are unable to afford the test. It’s a deterrent.

“I think the HSE should have its own centralized adaptation program – it would make the process for candidates more fluid.

“Nurses are going to have to do orientation wherever they are hired and learn how things are done. I think that adaptation would help teach them how things are done here before they even start their new jobs. It would probably give them a leg up on adapting to their units.”

Read More: What it’s like to work in Ireland: Irish Employment trends 2017

One nurse who trained and worked in the U.S. for nine years before recently moving back to Ireland said: “None of the hospitals actually offer the adaptation course though they are approved to run them. From what I have found out, the Dublin hospitals will run them for people they have recruited in but I (and other nurses I have talked to) have yet to find other hospitals running them.

“The only adaptation classes I have heard of are either through agencies or if you have contracted to a private nursing home. Both of these scenarios mean you contract to either the agency or nursing home for two years.

“Every hospital I called, including the hospital who wanted to hire me, said they cannot do the adaptation.”

The HSE told TheJournal.ie: “Most sites provide the period of adaptation and assessment to candidates whom they have offered employment (subject to successful completion and registration).

“The HSE also provides the adaptation and assessment programs for candidates who have been offered employment within the private nursing home sector.”

TheJournal.ie contacted the Department of Health about the difficulty many nurses have in finding hospitals that are carrying out the adaptation courses.

In a statement, it said: “Resourcing and recruitment issues in the clinical environment are outside the NMBI’s statutory remit and NMBI has no regulatory role in organizing adaptation placements.”