Pilot praised as small plane crash-landed on beach after major malfunction in incident which could have easily ended in tragedy. 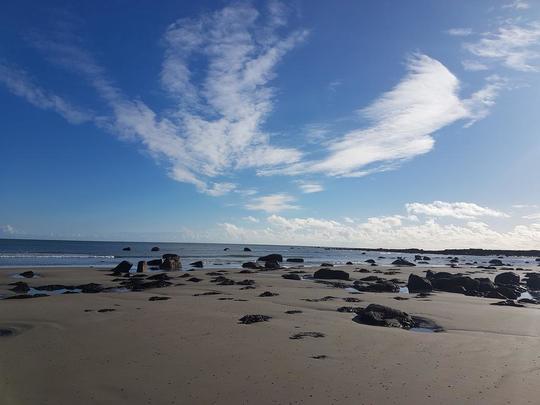 The pilot, Ioan Antaul, is being hailed as a hero after a twin-engine plane, flying University College Cork staff, safely crash-landed on Carne beach.

A twin-engine airplane, carrying out a marine life survey, crash-landed on Carne beach, inshore of Lady's Island near Carnsore Point, in County Wexford on Thursday (Sept 23). The pilot, named locally as Ioan Antaul, has been hailed as a hero by the emergency services that attended the scene, which they said could have easily ended in tragedy.

After a "major malfunction" the pilot landed the plane, a French-registered Vulcanair P68 aircraft, less than two meters from the shore, with the tide partially out, at 5.20pm on Thursday. A police spokesperson said there were four people on board – two men in their 20s and 50s and two women both aged in their 30s. The Coast Guard, the Royal National Lifeboat Institution, gardaí (Irish police), and paramedics attended the scene.

An emergency service member told the Irish Independent it was a "miracle" that all four people in the aircraft escaped the crash with only fractures and bruises.

He said "Pilots faced with such emergencies usually trade altitude for time.

“This pilot didn’t have that luxury and was faced with an emergency while over water."

They continued “The indications are that the emergency occurred at a height of only around 80 meters, so it was astonishing skill to get the plane down successfully in such a short timespan.

"The pilot literally had only seconds to react.”

An eyewitness, Niall Hore, was fishing at Carnsore Point when the plane landed.

He told the Independent "I was standing looking out over the beach, and I didn’t even really hear it until it was very close.

“It passed overhead and was flying very low over the rocks at the point before coming into the tideline and crashing down, stopping dead, into the sand.”

Investigations are continuing into a light aircraft crash-landing on the beach off Carnsore Point in Co Wexford | Read more: https://t.co/4BwWLpXOsj pic.twitter.com/IfwTe7TG0y

Hore ran to the beach to try and help the passengers.

“I was halfway down the beach to the plane when I realized, ‘I’ve no idea what I’m going to see here,” he said.

“We ran down, and two people were out of the plane and were shouting for us to call 112.

"The two people in the back of the plane were able to get out and had dragged out the pilot and co-pilot, and they were propped up against the plane.

"We just tried to keep them talking to make sure they were OK.

“One of the women was pretty bad and was covered in blood and not saying much, so we tried to talk to her to make sure she was OK.”

A team from the Air Accident Investigation Unit (AAIU) has traveled to the scene of the crash.

Speaking on RTÉ’s Morning Ireland on Friday, Chief Inspector of the AAIU said: “We have a team of investigators who spent most of yesterday evening securing the aircraft and recovering it from the waterline with the beach. The aircraft has been taken to higher ground, which was done earlier this morning.”

“Our team will be back in situ to start to dismantle the aircraft and prepare it for transport back to our facility in Gormanston County Meath where we will conduct further examinations on the aircraft itself,” he added.