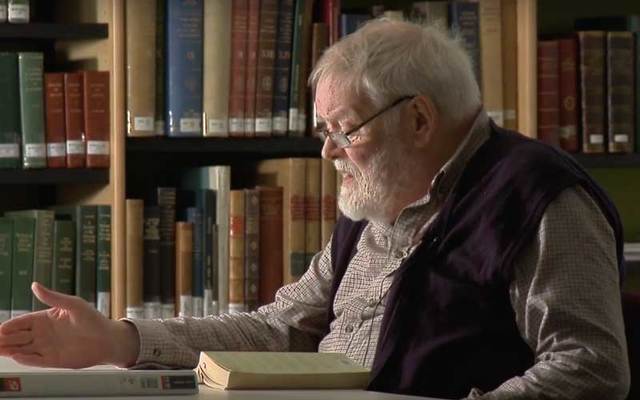 Longley, speaking during an interview as part of BBC Talkback’s Christmas Special series, said he wished he had learned Irish and that he was “envious” of fellow writers who are bilingual.

The 79-year-old Belfast native added that he “loathed the unionist mocking” of Irish, giving as an example DUP MP Gregory Campbell, who parodied the language in the Assembly in 2014.

Read More: How can the Irish language relieve your holiday stress?

Longley, the son of Londoners who moved to Northern Ireland before his birth, said that the 1989 Northern Ireland peace agreement allowed him to feel “both British and Irish” for the first time.

The BBC reports that Longley and his twin brother were born in Lower Crescent, just off University Road in Belfast, on July 27, 1939, only weeks before the start of the Second World War.

"Ireland has given me most of the data out of which I make sense of life but at the same time I am loyal to the Britannic side of my background.

Of his father, who was an English soldier who fought in WWI, he said: "I'm very proud of my father and what he stood for and when the Belfast Agreement was signed it was a kind of relief for me because it allowed me to be both British and Irish.

"It obliged me to think: 'What's the point of having only one cultural allegiance?'"

During the interview, Longley addressed recent controversies over the Irish language.

"We're very lucky on this island to have two languages," he said.

"It should be something that unionists should embrace and indeed they did - the United Irishmen, the northern Presbyterians in the 1790s were among the most vigorous promoters of the language.

"I think a lot of anti-Irish language unionists don't know what they're missing."

Longley has won multiple awards, including the Whitbread Poetry Award, the TS Eliot Prize and the Queen's Gold Medal for Poetry.

Read More: Are you an Irish language speaker or learner in America? This collection wants to hear from you

A Professor of Poetry for Ireland from 2007 to 2010, Longley was awarded the freedom of his native Belfast in 2015 for his contribution to literature and cultural life.

During the Talkback interview, he said: "A healthy society, a healthy political scene would celebrate Ulster Scots and especially the Irish language.

"It is such a huge loss if humanity loses a language."