Two letters from the Irish leader to his fiancée are part of an archive of materials related to the Easter Rising to be sold at Sotheby's on April 24. 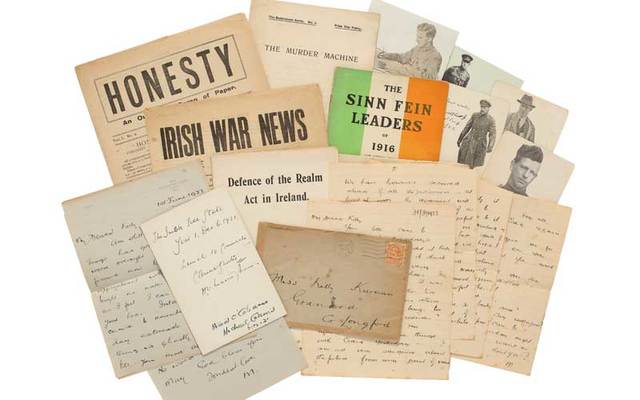 Lot 89 in the sale of the Maurice Neville Collection of Modern Literature (Part III) at Sotheby's. Sothebys.com

Two love letters from Michael Collins to his fiancée Kitty Kiernan are part of an extensive archive of Easter Rising material that will go up for auction at Sotheby’s in New York on April 24.

“Ireland will have cause to remember her present-day extremists,” wrote Collins to the woman he was engaged to marry the following November. Collins was in London to meet with Winston Churchill as Ireland drifted towards civil war over the Anglo-Irish Treaty which Collins had signed in December 1921.

This letter and another letter dated March 31 are part of Lot 89 in the sale of the Maurice Neville Collection of Modern Literature (Part III), the Irish Examiner reports. The materials, including 22 pamphlets and books, eight broadsides and handbills, and 29 autograph items from Dublin and London from 1910 to 1925, all relate to the Easter Rising and the Irish Rebellion.

“We came to an agreement on certain things with Craig yesterday— I am not very sanguine about the future from any point of view,” he writes in the March letter.

“We have however secured release of all the prisoners.... but the news from Ireland is very bad and the ‘powers that be’ here are getting very alarmed that there may be a bust-up at any moment.

“Were it not for the awful consequences I’d almost welcome it.... yet one has the responsibility. It would be cowardly to shirk from standing up to it.

“The whole business is casting a gloom over me and in spite of what is a big human hope I cannot keep thinking that as a people we are destined to go on dreaming, vainly hoping, striving to no purpose until we are all gone.”

In the June letter he reports: “Things have got very much worse overnight and I am looking forward now to my last appointment with them.

“I’m returning tonight no matter what happens as I feel I can do no more good here. Ireland will have cause to remember her present day extremists.

“The whole thing is ghastly but I’ll tell you more about it when I see you. It was only after my scribble yesterday I heard about Joe McGuinness’s death.

“He is a great loss to us but apart from that I feel the personal loss more keenly. He was the one most responsible for the recent peace. It makes the present position all the more tragic.”

The lot contains a copy of the Proclamation, two copies of the Irish War News and letters and signatures of Charles Stewart Parnell, de Valera, Childers, McBride, WT Cosgrave, The O’Rahilly, Kevin O’Higgins, Desmond FitzGerald and others. Also included is a souvenir program of O’Donovan Rossa’s funeral to Glasnevin Cemetery in August 1915.