Author Dermot McEvoy shows how Michael Collins is gone but not forgotten in a tour around Dublin which includes ... 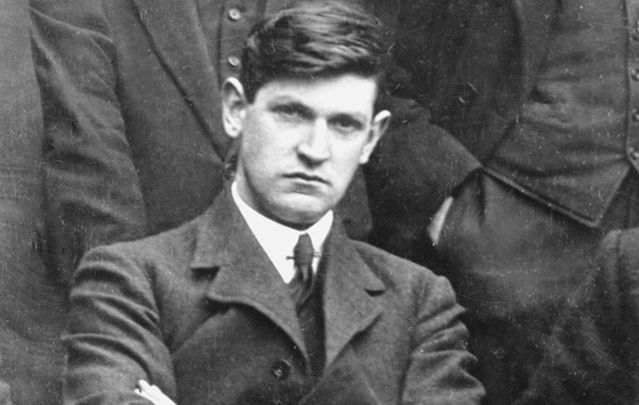 Author Dermot McEvoy shows how Michael Collins is gone but not forgotten in a tour around Dublin which includes locations central to the story of one of Ireland’s most important leaders.

An inspiration to his men and the people of Ireland, Collins was the most wanted man in Ireland yet still managed to walk and cycle around Dublin with a 10,000-pound bounty (almost $37,000) on his head. He was Ireland’s first minister for finance, became Director of Intelligence in the Irish Republican Army and negotiated the treaty which freed what is now the Republic of Ireland from 700 years of British rule.

Assassinated at Béal na mBláth, County Cork, on August 22, 1922 at the age of 31, Collins’s body was buried in Glasnevin Cemetery in Dublin but his spirit is still very much a presence in his native county and the capital.

Dermot McEvoy claims that there are two reasons why the revolutionary and politician continues to exert such a grasp on Dublin and its inhabitants, the first being that, “Unlike almost every other Irish revolutionary, he was successful” and the second, “that he was one of their own, a 'Jackeen' by adoption, a Cork man who knew every back alley and pub in 'durty ould Dublin,' as the locals often call it. In the era European Union austerity, the Irish see an icon — albeit a dead one — they can still believe in.”

In honor of the “Big Fella”, McEvoy takes us on a walking tour of Collins’s regular haunts, beginning with no.3 St Andrew Street which was the location of one of Collins’s main finance offices. After going over the books for the National Loan, Collins would cross the street to the Old Stand pub where he would hold informal meetings of the outlawed Irish Republican Brotherhood.

Leaving the Old Stand, McEvoy leads the way to the Stag’s Head, one of the most beautiful Victorian pubs in Dublin and a favorite of Collins’s where, after a hard day of creating mayhem for the British, he would come and enjoy a whiskey from “Mick’s Barrel,” which they kept especially for him.

A short distance from the Stag’s Head is no.3 Crow Street where Collins kept his intelligence office, disguised as John F. Fowler, printer and binder, and plotted the downfall of the British Secret Service, though he rarely visited it because of security issues.

No.32 Bachelors Walk was the location of another of Collins’s offices while, nearby, is the Oval Bar which was frequented by Collins and his men probably due to its proximity to “The Dump”, a waiting room for the squad on the top floor of the adjacent Eason bookshop building on the corner of Abbey and O’Connell streets.

Turning left at O’Connell Street, the portico of the General Post Office with its bullet scars on the columns can be seen. Collins fought inside the GPO at the start of the Easter Rising on April 24, 1916, but was forced to evacuate the burning building by the end of the week to take refuge at 16 Moore Street, just off Henry Street. A plaque to the left of the second-floor window marks the building as a place of refuge for five of the seven signatories of the Proclamation for Irish Independence.

Probably the most important address associated with Collins during this time was Vaughan’s Hotel, located at no.29 Parnell Square, which the Cork man called “Joint Number One”. Collins was seen to frequent the Vaughan’s Hotel often, even though the British were constantly looking for him.

Across from Vaughan’s lies the Garden of Remembrance where Collins and the other rebels from the GPO were bivouacked for the night after their surrender. It was here that Queen Elizabeth II, on her state visit to Ireland in 2011, laid a wreath in memory of those who died in the fight for Irish freedom.

Much of McEvoy’s tour takes place in the center of Dublin and should take less than an hour to complete.

Read a review of Dermot’s novel Our Lady of Greenwich Village here.