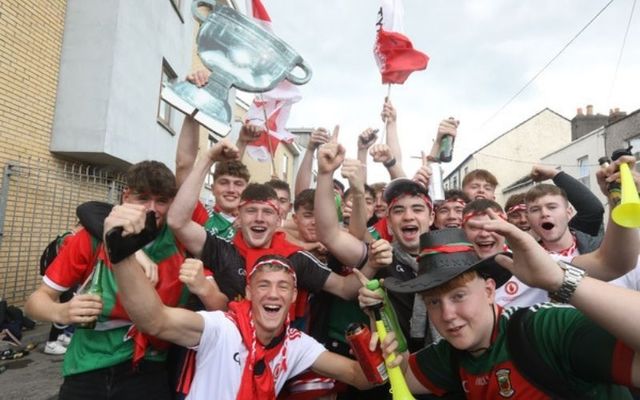 Tyrone and Mayo fans pose for photographs ahead of Saturday's All Ireland final. Rolling News

Mayo's wait for an All Ireland title goes on after they were beaten 2-14 to 0-15 by Tyrone at Croke Park on Saturday evening.

Two second-half goals from Cathal McShane and Darren McCurry proved the difference in a closely-fought final as Tyrone claimed their fourth-ever All Ireland title and their first since 2008.

The wait goes on for Mayo, however, who have lost an astonishing 11 finals since their last All Ireland title in 1951.

Their most recent All Ireland final defeat - their sixth such defeat since 2012 - has sparked renewed coverage of the famous Mayo curse, which dates back to their last victory in an All Ireland final against Meath in 1951.

According to legend, the 1951 All Ireland-winning team did not stop to pay their respects at a funeral as they traveled back to Mayo with the Sam Maguire Cup, resulting in a curse that the county would not win another All Ireland until every member of the team died, although the legend is undecided on whether the local priest, the bereaved widow, or a local witch cast the curse.

Paddy Prendergast, 94, is the last surviving member of the team that last claimed glory for Mayo 70 years ago.

Whether Mayo are cursed or not is impossible to prove, but they certainly felt cursed on Saturday, spurning a number of gilt-edged goal chances, including a second-half penalty that cannoned off the post.

In truth, however, Mayo were second best for large parts of Saturday's final and Tyrone were worthy winners.

The Ulster county dominated the game for large periods, kicking several superb points from play in the first half to take a deserved two-point lead into the break.

They didn't score a second-half point for 30 minutes, but fisted goals from McShane and McCurry ensured that they kept Mayo at arm's length and allowed them to see the game out in relative comfort.

Tyrone's victory is one of the most remarkable All Ireland victories in recent memories, especially considering they conceded six goals in a 16-point hammering against Kerry in the National League in June.

More recently, Tyrone announced that they were withdrawing from their All Ireland semi-final against the same opponents due to a significant COVID-19 outbreak amongst their players.

Originally scheduled for August 15, the game was rearranged for August 21,  prompting Tyrone to pull out of the championship on the grounds that they did not have enough time to recover.

However, the GAA controversially agreed to postpone the game until August 28, resulting in a two-week delay for the All Ireland final.

The controversial postponement of the All Ireland semi-final notwithstanding, Tyrone still had to beat a formidable Kerry team that ripped them apart just two months previously.