Man arrested in connection with fatal assault in Dublin

A suspect in his 30s has been arrested in connection with the fatal stabbing of a man in his 60s at a residence in Carriglea View, Firhouse, Dublin on Sunday night. 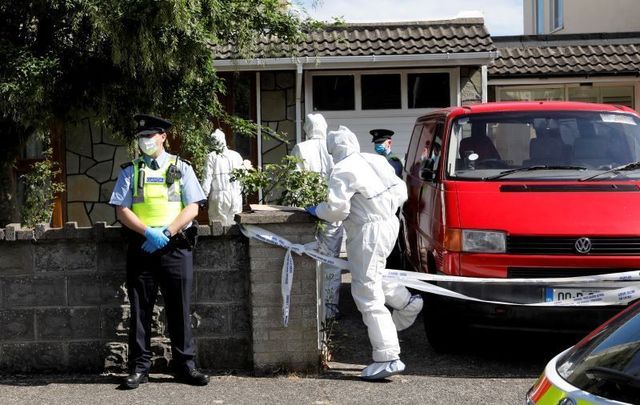 June 21, 2021: Garda wearing face masks as Technical Bureau (Forensic Teams) arrive outside a house in Carriglea View, a housing estate in Firhouse in Dublin where a man was fatally stabbed on June 20. RollingNews.ie

A man in his 30s has been arrested in connection with a fatal assault in south Dublin on Sunday evening.

Update: Gardaí are now treating the incident as a murder investigation.

Gardaí and other emergency services responded to an incident in a house Carriglea View in Firhouse, County Dublin, where a man in his 60s was attacked and killed at around 11:50 p.m.

The suspect was visiting the house at the time of the assault and appears to be related to the victim.

The suspect, who is in his 30s, was arrested on suspicion of murder and is currently being detained at Tallaght Garda Station under section 4 of the Criminal Justice Act. He can be held for up to 24 hours without charge.

The victim appears to have been stabbed and his body remained at the scene while the Garda Technical Bureau carried out a technical examination. The body was subsequently removed in the afternoon so that the state pathologist could carry out a postmortem.

Gardaí say that they are treating the case as a domestic incident and that they are not looking for any other suspects at present.

The victim is a separated father of two and ran his own carpentry business. He lived in the Carriglea home for many years and rented out rooms to unrelated lodgers.

Gardaí have spoken to the other people who live in the house and say that they are cooperating with the investigation. However, they are also appealing for any witnesses to come forward.

They urged anyone who was in the Carriglea area of Firhouse between 11:30 p.m. on Sunday and 12:30 a.m. on Monday to come forward at Tallaght Garda Station.

Anyone with any information in relation to this matter should contact Tallaght Garda Station on 01 666 6000, the Garda Confidential Line on 1800 666 111, or any Garda station.