Detective Garda Adrian Donohoe was murdered during a robbery at the Lordship Credit Union in 2013. 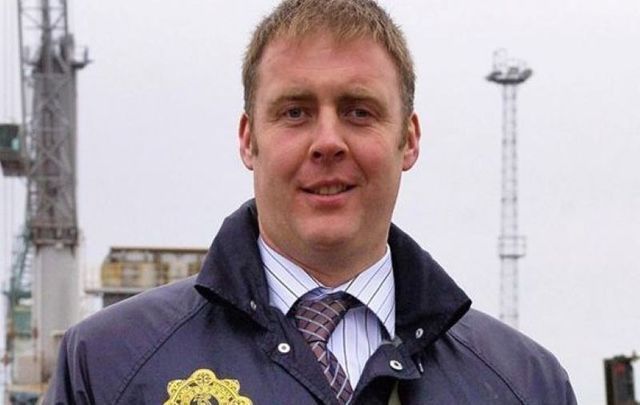 Detective Garda Adrian Donohoe was shot in the line of duty in 2013.

The man accused of murdering Detective Garda Adrian Donohoe "wore the shooting like a badge of honor" when he moved to America, a prosecuting barrister told the Central Criminal Court.

Lorcan Staines SC for the prosecution made his closing speech on Friday and said that Aaron Brady, the accused, had told a "litany of lies" during the trial.

Staines claimed that Brady was a "skilled and accomplished liar" who believed he was "beyond the long arm of the law" when he fled to America.

Brady used the fact that he murdered a garda to intimidate people once he moved to New York, Staines told the court.

He said that Brady often cried, lamented in drink, or puffed out his chest in pride when talking about the murder in front of people.

The barrister additionally told the court Brady was confident that nobody would give him up when gardaí came to New York to investigate.

"He was wrong about that. Not all the people he talked to about this were willing to turn the other way. Two came to give evidence," Staines said.

Aaron Brady has pled not guilty to the capital murder of Detective Garda Adrian Donohoe during the robbery of the Lordship Credit Union in County Louth in 2013.

Donohoe was shot in the back of the head from close range during an organized robbery by a gang of five men who blocked the entrance to the credit union car park with a stolen Volkswagen Passat.

"He was a member of his community, he was a colleague," Staines said. He also said that when Brady pulled the trigger, "he knew he was pulling that trigger at a member of An Garda Síochána."

The prosection criticized the manner of Brady's defence, claiming that the accused had instructed his counsel to "argue that black was white".

"The criticisms I make are of Aaron Brady, not of his lawyers. He has been provided with some of the best lawyers in the State who do their jobs to the highest professional standards. But they act on his instructions," Staines said.

He said that Brady took advantage of a disclosure given to him by the prosecution to construct a false alibi around diesel laundering.

"He is a skilled and practised liar and he does what clever liars do, takes real events and superimposes onto them falsities.

"He has told you a litany of lies, big lies, little lies, clever lies, stupid lies but all lies told for the same purpose: the advantage of Aaron Brady."

Staines told the jury that Brady's conviction relies on a significant amount of circumstantial evidence that could be viewed as a coincidence if viewed in isolation.

He pointed to evidence of Aaron Brady and two associates who can't be named travelling to Clogherhead, near Lordship, three days before the Credit Union robbery to steal a Volkswagen Passat.

Staines said Suspect A's distinctive BMW 5-series with a modified roof was spotted in Clogherhead on the night the Volkswagen was stolen. If this was just coincidence, he said, a different BMW 5-series would have been spotted.

He said that CCTV footage of Suspect A's BMW driving through Lordship with its window rolled down hours before the Credit Union robbery would not be evidence of a scoping exercise when viewed in isolation.

Staines said that the jury would have to believe that Brady and the two unnamed suspects had all happened to turn their phones off for two hours for "innocent reasons" at a time that perfectly coincided with the robbery.

A series of phone calls between Brady and Suspect B at relevant times during the day of the robbery would also have to be seen as a coincidence, as would the fact that the BMW 5-series was spotted close to the area where the Volkswagen Passat was burnt out.

Furthermore, it would also have to be a coincidence that all three suspects fled to "all corners of the world", Staines said, and that Daniel Cahill and Mollie Staunton both said that Brady had confessed to shooting a garda while he was in New York.

"Is that reasonably possible?" Staines asked the jury. "That would be some string of unfortunate events. The prosecution leaves that determination in your hands."