Only seven giant squid have ever been caught in Irish waters and four have been netted by the one family. 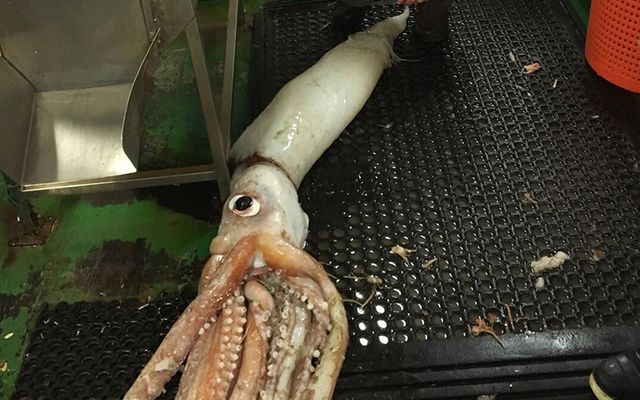 One of seven giant squid found in the Irish seas. RTE

The crew of Cú na Mara (Irish for ‘Hound of the Sea’) were fishing 150 miles out to seat off the Dingle Peninsula when they hoisted the beast ashore.

"Only seven have been recorded here since records began almost 350 years ago. The very first giant squid recorded in Ireland was also landed in Dingle, when fishermen brought one ashore in 1673," he told RTÉ.

That scientific name for the squid is ‘architeuthis’ and the specimen caught this week measured 18 feet in total length - although some have even been known to grown up to 42 feet.

The first squid was not as well preserved as this one, meaning the second specimen will be displayed at Dingle’s Oceanworld Aquarium.

When the first squid was caught Flannery fielded calls asking why it could not have been kept alive, but the squid lives at the depths of the ocean floor and would not have been able to survive at the surface.

Flannery now suspects the Kerry coast must be teeming (in relative terms) with the creatures and hopes a study can be carried out as to why the local habitat seems to suit them so well.

Another Giant Squid landed in Dingle. Only 7th recorded in Ireland in 350 years. Amazingly 4 have been caught by Flannery family! @rtenews pic.twitter.com/1gWBYZr045

“We had three in one year in 1995, and none since. Now two turn up. I would love to see the marine institute use a remote explorer off the Porcupine to film them. I strongly suspect we have a lot of them there.”

For Cú na Mara skipper, Patrick Flannery, the catches elicited a certain sense of déjà vu as it was his father, Michael, who landed the first two in 1995.

"My father has two and I have two. I'll probably have to catch a third now so that I can have bragging rights," he said.

"When we opened the net we couldn't believe it, that it was another one. The lads were very excited. What are the chances of two in the one year!"