The former President's grave is the most popular gravesite at the military cemetery. 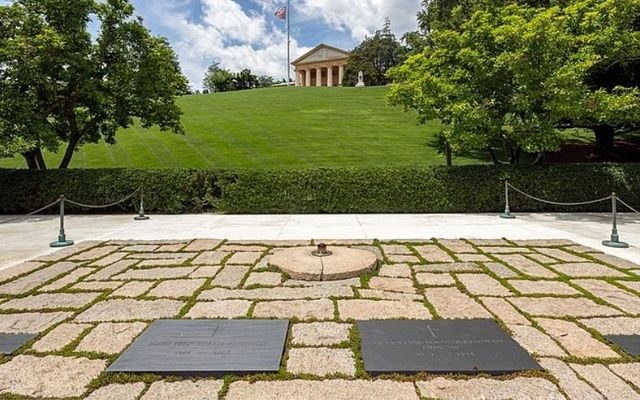 The gravesite of former President John F. Kennedy has reopened to the public at Arlington National Cemetery.

Kennedy's grave, which is the most popular site at the cemetery among tourists, had been closed since March due to the COVID-19 pandemic but reopened on Saturday, Oct. 3, Arlington officials confirmed in a statement.

Robert F. Kennedy and Edward Kennedy are both buried at the site, while former First Lady Jackie Kennedy is buried next to her husband.

Two Kennedy infants, who died at birth, are also buried at the site, while there is also a memorial marker to Joseph Kennedy, JFK's older brother, who was lost during a World War II bombing mission and never found.

The Eternal Flame, lit by Jackie Kennedy on the day of her husband's funeral, also burns brightly in a five-foot circular granite stone at the head of JFK's grave.

A boundary wall at the site is inscribed with some of Kennedy's most famous speeches, including his inaugural address, when he implored Americans to "ask not what your country can do for you, but what you can do for your country."

The site, which had been closed for seven months, reopened last Saturday with new safety regulations in place.

Visitors are required to walk in a one-way system, Arlington officials said, and staff at the cemetery have installed directional signage to ensure compliance.

The new signs will guide visitors to the quotation wall on the right-hand side of the side and lead them through to the left-hand side near Joseph Kennedy's memorial marker.

The cemetery reopened to members of the public on Sept. 9, operating an 8 a.m. to 5 p.m. schedule seven days a week.

However, other popular sites at the cemetery, including the Tomb of the Unknown Soldier, the Memorial Amphitheater and exhibits in the Welcome Center remain closed due to COVID-19.

Visitors are additionally required to wear face coverings and practice social distancing when visiting the cemetery.