Who is the mystery Brady?

Winter chills and addled! Is it Phil (The Gunner) Brady? Liam Brady? Who? 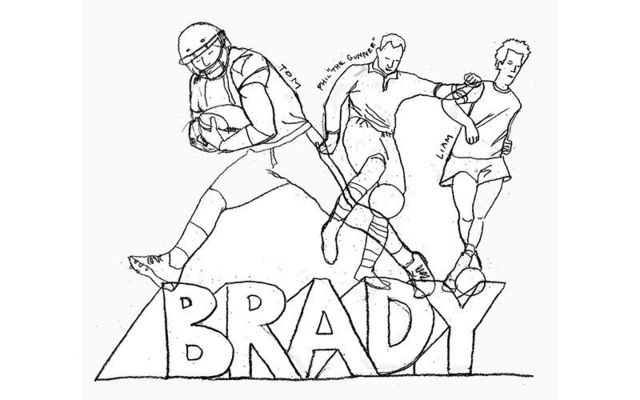 Winter chills and addled! Is it Phil (The Gunner) Brady? Liam Brady? Who?

Let's have a bit of lighthearted craic to lighten the gloom of the winter chills and spills attacking us all incessantly lately.

Anyway, to tell the total truth I have to confess that my poor old head is added entirely by, above all things, a sporting matter. I need more than a little assistance ASAP to prevent me from making an even bigger fool of myself than usual.

The local grapevine has been buzzing for the last fortnight about the exploits of another great Cavan footballer (or maybe he’s a handballer) by the name of Brady, you see. I don’t know his first name, but clearly, he’s yet another good Cavan star on the football field.

And when somebody asked me what I thought about Brady late last night sure didn’t I assume they were talking about Phil (The Gunner) Brady from Cavan who was so teak tough and hard away back when I was a schoolboy in the fifties of sporting stars of that era. And didn’t that reveal my ignorance of sports stars altogether because the lads I was speaking with chuckled at me.

They said this Brady star never played for the GAA footballers of Breffini at all.  He was so gifted, they said, that he plied his consummate skills at the top level across the water in England. And he was well paid for it too, wasn’t he, they said, and cute too because he wouldn’t have earned a penny playing GAA for Cavan.

So then I was sure they were talking about the great Arsenal star of the recent past, Liam Brady, well known to many of you over there both as a player in his prime and nowadays as a media pundit. And, feeling tuned in, at last, I opened my foolish mouth even wider and said that, yes, Liam Brady was also a Gunner because that is the title fixed to Arsenal.

That made them chuckle at me even more widely along the bar and advise me to go home as soon as possible to clear my head and aging mind.  And they deliberately refused to tell me which Brady they were talking about with such excitement, except to state that he was a billionaire he was that gifted, the whole sporting world was in the palms of his big Cavan hands again.

The email address cormacseamus101@gmail.com will be glad to be given precise details about this new Cavan star named Brady to put me out of my puzzled disgrace currently.

Do any of ye know who this star is? Is he a soccer star or a rugby Brady or a golfer or basketballer? Enlighten me, please.

The only clue I picked up today suggests his career might not last too long more because it was alleged that he is very partial to a sip from what my reliable source called “the old bowl.” And don’t we all know that at this stage of its existence thousands of gallons of hard whiskey have been wildly supped from our native silver bowls named after Sam Maguire and Liam McCarthy. At great cost to many of those involved too. We’ll say no more on that allegation.

On a broader scale, I’m surprised that the 2019 grapevine along the Wild Atlantic Way is so surprised that a young Brady ballplayer in any code is so successful and gifted on the playing fields. The Gunner Brady playing for Cavan when I was a schoolboy sometimes was so brilliant that he virtually beat my poor Fermanagh, by himself, showing no mercy to the county next door across a very hard border back then.

And in later years, playing club football at a low enough level, any opponent bearing the surname Brady had me in his pocket inside five or 10 minutes. I believe the great Gunner Brady who had such a bright career for years with good Cavan GAA sides, was actually a police sergeant in his working life off the field.

I dimly recall that he played in the U.S. once in a famous final contested in the Polo Grounds somewhere in New York. Does this new Brady star making all the headlines play polo himself too when he is not visiting his homeland?

Someone out there enlighten me, please. And, maybe, if there is any substance at all to that allegation whispered to me, maybe he should be advised not to get too fond of sipping from that silvery bowl. I’m sure, because the Brady bunch are cute as well as hardy, that there is no danger of that.

I’m not going outside the door socially in Clare until one of ye answers this SOS!!!