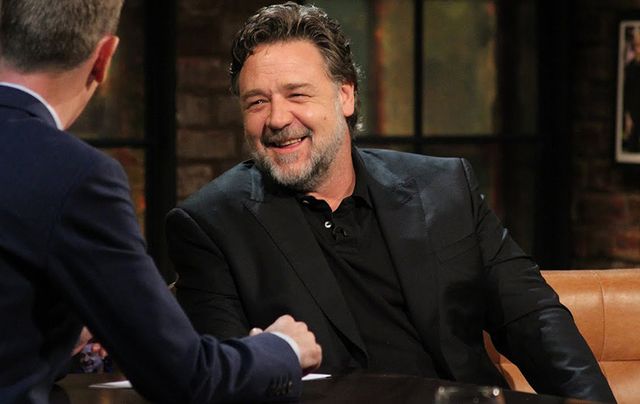 The sun shone for Russell Crowe during his couple of days in Dublin last week…for the first time ever, the Oscar winning actor and lover of all things Irish revealed.

Crowe was in the Irish capital for some R&R and to rehearse with his band Indoor Garden Party, which will play London, Leeds and Dublin in the next few days.  Crowe, not always warm and fuzzy, was in a great mood, happily signing autographs, doing interviews and posing for fans who gathered outside the Merrion Hotel where he stayed.

He enjoyed the bright spells, as they say over there, very much. “Yesterday, and I’m not taking the piss, this is factual, was my first sunny day in Dublin out of all the times I’ve visited. So that was a great experience,” Aussie Crowe told Ryan Tubridy on The Late Late Show on Friday night.

“Today I actually went for a walk.  It was cool.  I've been here a number of times over the years. But the last time I had a social event here was 2003. Since then, it's been hotel rooms, interview rooms, movie theaters, back on the plane.”

Crowe, a prolific user of Twitter, posted from his travels around Dublin, including stops in Irish pubs.  He told Tubridy that he’s never been disappointed by an Irish pint, and as for his favorite pub?

"Why pick one pub, when I'll just go to all of them over time?" Crowe asked. "Make new friends. I don't think it's possible for me to say I've been in to a pub in Dublin where I got a s*** pint.  It's just not possible."

Crowe’s got some Irish blood in him somewhere, he says, but it’s been hard to track down.

"We know that there is an Irish connection," he said. "But it's actually... we haven't been able to track it down. We've got Welsh on my dad's side and Scottish on my mum's side and a few other things too -- Italian, Norwegian, Maori. It's a bit of a combination of things, yeah."

Crowe took to the Late Late stage to sing with his band.  The studio audience was receptive, but social media snarks? Not so much.

“He's playing the Olympia? Jaysus, he shouldn't even be playing outside the Olympia,” one tweeter opined.

“How the f*** do they let Russell Crowe sing on TV.  If you have money you can literally go on TV and pretend you can do stuff,” another reckoned.