Plunkett, Pearse and Tone - dying for some of Ireland

"We had them all the other night...We had Roddy McCorley meeting his doom at the Bridge of Toome. We had Kelly from Killane below in the County Wexford..." 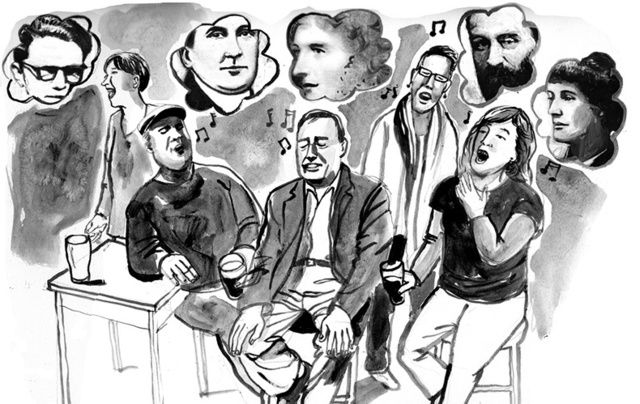 "We had them all the other night...We had Roddy McCorley meeting his doom at the Bridge of Toome. We had Kelly from Killane below in the County Wexford..." Caty Bartholomew

We march resolutely once more towards that season of highly charged patriotism surrounding St. Patrick's Day, and there is one element of the buzz already building up here which has always intrigued me at this time of the year.

It is this national fascination we have with the idea and concept of actually dying for Mother Ireland.  I have certain reservations about that.

I was involved on the sidelines of a pub singsong the other night, not for the first time as ye well know, and the overwhelming majority of the ballads bouncing off the rafters hour after hour were in praise of the mighty men and women down the centuries who have laid down their mortal lives for Mother Ireland -- often enough with little thanks too -- many of them to be quickly forgotten except in the lyrics of ballads that, to be brutally frank, are often enough of poor quality.  Especially when being rendered late in the night by poor quality singers (like myself) competing against background babble and the clinking and clattering of big glasses of porter and beer.

We had them all the other night, from Plunkett, Pearse and Tone to Sean South of Garryowen. We had Roddy McCorley meeting his doom at the Bridge of Toome. We had Kelly from Killane below in the County Wexford, and we went all the way back to poor Father Murphy from the same county for whom Vinegar Hill became bitter indeed after a good beginning and who went to heaven after the enemy yeomen burned his body upon the rack.

A lady that I could scarcely hear because of the noise sang a ditty about Countess Marcievicz from Sligo, and Roger Casement was remembered musically at least twice. It went on and on.

For what it is worth, when my turn came around I sang brother Mickie's good song "Only Our Rivers Run Free," part of which bemoans the scarcity of Irishmen willing to die for Ireland at all at all.

Musing in the corner later as the ballads continued to flow, however, again it struck me that all the heroes and heroines mentioned did not venture forth in their various rebellions with the intention of actually dying for Mother Ireland.

Surely they knew they were risking their lives by their actions, but all would certainly have wished to have lived for the rest of their lives in the freed Ireland they were hoping to win back from John Bull.

And that line of thought triggered the personal question of which part of Ireland would I risk what is left of my life for.  Upon reflection I produced quite a definitive list.

I would not lay my life on the line, for example, under any circumstances, for any area of Dublin city. Especially not for the inner city districts which have recently spawned a hideous gang war between the Hutch and Kinahan families. It has claimed nine or 10 lives so far and is raging away daily.

Going back in history, too, that inner city district was the home of the scoundrels who took advantage of the Easter Rising and the sacrifices of the men and women in the GPO to loot the shops in O'Connell Street. No, beyond you any doubt, I would not willingly die for Dublin.

Neither would I die for any acre of Co. Mayo on the other coast with the exception maybe of the warm-hearted coastal town of Belmullet, whose main street is named American Street and points that way and where I have always had very fulfilling and enjoyable trips. That town also produced a most lovable rascally TD called Joe Lenihan who provided many' s the good yarn for me in his day.

On any of the many occasions when I had to work in the rest of Mayo down the years, on one story or another, I always was glad to cross back over the county line and felt, truthfully, that the place had stolen more than a little of my life force away.

I would take risks for north Leitrim, yes, and not just because it houses the still zesty Ballroom of Romance in Glenfarne, but I would not wish to fall in the service of south Leitrim which, though the same county, feels like a different world.

Neither would I die for Cavan or Monaghan or Roscommon either (apart from the gentle town of Boyle), or any area of Donegal apart from the town lands around the Inishowen Peninsula. And Tory Island of the ancient kings. Inishbofin, further south, off Galway, is the only other island I would commit to if necessary.

Naturally enough I have soft spots in my heart for Galway and Clare and Waterford because I have lived and loved in all three but, for sure, the Midlands have never tugged at my heartstrings and they do not twang either for counties which, in a sense, are small independent statelets, counties like Cork and Kerry and Tipperary.

I may have been born in Fermanagh, on the other side of the border, but the less time I have to spend there ever since, the better it suits my soul.  It was no joy, you see, to be born into the nationalist minority community at the time I arrived in this world all those years ago.

So, you see, the ballad session celebrating the deeds of all those who gave their lives for Mother Ireland led me to create this quite specific list.

A final thought on the night, and a fundamental one maybe too, was that Mother Ireland inexorably claims us all back in the end. Either in an expensive oak casket at an elaborate funeral ceremony which beggars many families for months afterwards.  Or as swirling crematorium ashes scattered to the four winds.