Memories of a colorful family - The McGowans of Bealcragga

“The folklore reported they had all prospered, no matter where they settled, and I heard that one was a circus strongman in Europe somewhere, and another had done well for a while as a professional boxer in Australia.” 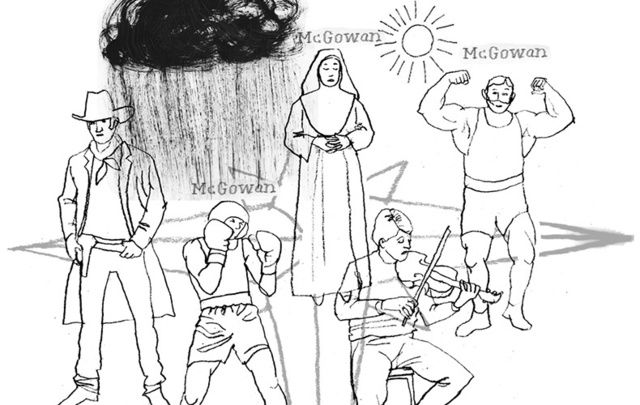 “The folklore reported they had all prospered, no matter where they settled, and I heard that one was a circus strongman in Europe somewhere, and another had done well for a while as a professional boxer in Australia.” Caty Bartholomew

I had to travel to the Erneside homeland on business just after Christmas. Coming back home afterwards, I caught sight of the broken gables of three farmhouses on the slopes of Bealcragga on the edge of the parish.

Because of the turning of the years just a few hours ahead of me at the time, I grinned and remembered what Paddy Reynolds used say about incoming years back when I was a boy.  Paddy would colorfully compare the potential of the New Year to the McGowans of Bealcragga, and dammit the analogy was truly apt.

It was the three McGowan families who lived inside those broken gables I saw from the road back when I was young and, yes, beyond any doubt, any and all of them were as gloriously unpredictable as the twistings and turnings of the 12 months ahead of us all. I will give you just a couple of examples of the actions of a few of the McGowans of my childhood. Three was one beautiful red haired daughter of one of the houses who was decently courted and wooed and won by a big farmer from the next parish. He would have been considered a catch back then.

The wedding day arrived and they smiled at each other at the altar rails and then, like a shot, surprising everybody in the chapel, she turned on her heel and walked out leaving great chaos and confusion behind.

The family brought her home and she told them there, according to the folklore, that she got a spiritual kind of message to avoid the wedding ring and instead enter the convent and devote her life to God instead of a Killesher farm. Inside a few years, a formidable professed nun, later a mother superior, she was, again according to the folklore, saving the lives of thousands of black babies in Africa as a missionary. Strangely enough, another McGowan story also emanated from the same chapel years earlier. One of the boys was being confirmed in what was a big parish day. The ritual then, whatever about nowadays, involved the bishop lightly slapping the face of the applicant for the sacrament.

When the Bishop lightly struck McGowan on the left cheek the lad instantly responded with a haymaker of a right which downed the poor bishop, crozier and all, and created mayhem altogether. That McGowan, like many of them, later emigrated to the states, and it was said he became a cowboy who had notches on the colt at his hip.

That's the McGowans for you, back then in their heyday, so Paddy Reynolds was colorfully accurate in his comparison. But that is only one facet of what they were. The McGowans were also often the life and soul of the country house dances and parties of the twenties and thirties of the last century.

Many of them were great musicians, especially on the fiddle and the accordion, and all of them, without exception, were mighty ballad singers. I heard one of them who came back from Chicago one summer as an old man singing "Down By The Sally Gardens."

I have never heard that classic so magnificently rendered.  Never ever. They were skilled tradesmen when tradesmen were scarce. They were model neighbor's and friends if you met them in the right mood on the right day. And, just like the year ahead of us, you never knew when that day was in it.

They could turn dark and dangerous (said Paddy Reynolds) as quick as lightning or a May shower. Especially after a drink or two, and epically in relation to political stuff or farming matters, a McGowan could transform from bright June to freezing November in the blink of an eye. I left home quite young, in my teens, and by then the two families that remained in Bealcragga were aged. The young ones had all emigrated to the four corners of the earth.

The folklore reported they had all prospered, no matter where they settled, and I heard that one was a circus strongman in Europe somewhere, and another had done well for a while as a professional boxer in Australia.

On the brink of another year with parameters and potentials as varied as theirs, I crossed myself as I passed the broken gables and said a brief prayer for them all.