Dublin man Rory Rigney was on the same train car as the explosive device on the London Underground at Parsons Green. 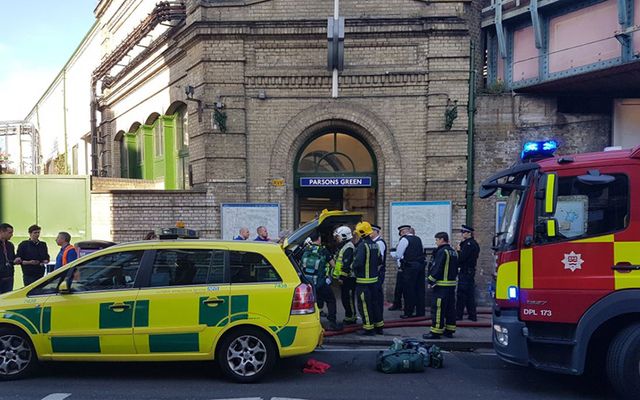 A Dublin man, Rory Rigney, 37, has given a frightening account of the improvised explosive device that went off this morning on the London Underground at Parsons Green station at 8:20 am, GMT.

Rigney, who told The Guardian he was mere feet from the homemade bomb, recalls seeing “a fireball coming towards me.

“It smelled like a fire extinguisher and there was this foam on the floor,” he said.

He also described seeing red wired protruding from a bucket, which had been camouflaged by a shopping bag, and registering fellow passengers helping a woman who “looked like she had been burnt.”

“The train was packed, and I was down the other side of the carriage standing up, looking at my phone, and then I heard a big boom and felt this big heat on my face,” Natalie Bedford told The New York Times.

She described the panic that followed. “I ran for my life, but there was no way out. The doors were full of people and the carriage was too packed.”

Twenty-nine people were hospitalized with injuries, some from the explosion, others from being trampled in the stampede that followed. Hospital officials confirmed that none of the injuries were life-threatening, and that eight of the injured had been released by Friday afternoon.

Met Police’s Deputy Assistant Police Commissioner Neil Basu, the senior national coordinator for Counter-Terrorism policing, declared it a terrorist incident, and police have asked people to come forward with any information, accounts, or images from the scene. A manhunt is underway for suspects.

“The Metropolitan Police have confirmed that the explosion on a train at Parsons Green Station this morning is being treated as terrorism,” he said.

“Our city utterly condemns the hideous individuals who attempt to use terror to harm us and destroy our way of life.

“As London has proven again and again, we will never be intimidated or defeated by terrorism.”

Ireland’s Minister for Foreign Affairs Simon Coveney reacted to the incident, stating: “I am shocked by the incident in London this morning, which the Metropolitan Police are treating as a suspected terrorist attack.

“My Department is monitoring the situation closely through the Irish Embassy in London and the Consular Division in Dublin.”

The Embassy of Ireland to Britain said: “We are aware of an incident at Parson Green and are monitoring the situation. Please follow the advice of the local authorities.”