An Irish woman who suffered horrific injuries in a minor car crash 13 years ago is criticizing celebrities who post social media pics showing their feet on the car dashboard. 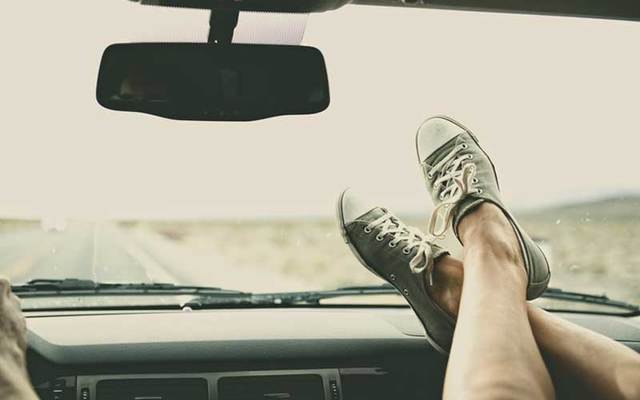 An Irish woman who suffered horrific facial injuries in a car crash is warning people of the dangers of putting your feet on the dashboard. Getty Images

An Irish woman who suffered horrific injuries in a minor car crash 13 years ago is criticizing celebrities who post social media pics showing their feet on the car dashboard.

Grainne Kealy, 35, from Co Laois, had her feet on the dash of her boyfriend’s jeep when it skidded on ice, deploying the air bag and pushing her knees into her forehead. She broke every bone in her face, suffered a brain injury, and was left without a forehead for two years.

Read More: Irish girl’s horror crash photos reveal danger of sitting in a car like this

Kealy needed extensive facial reconstruction after the accident, and had to have an Italian ceramic forehead fitted by surgeons at Beaumont Hospital.

She has since worked to raise awareness of the dangerous practice, which many celebs, including Kim Kardashin and Selena Gomez, have shown themselves doing on social media, The Sun reports.

“It was something I never thought I’d speak about because I thought I’d be laughed at for being so stupid," said Kealy, a hotel worker.

“But all these years later and I see people continuing to do the same thing. It drives me mad when I see celebrities doing it.

“You see it in films too. I shouldn’t admit to being a Twilight fan but in one of the films you see the main character Bella (played by Kirsten Stewart) doing it.

"I was practically screaming at the TV when I saw it.

She said: “I thought having a seat belt on was enough. My ex was a careful driver so I never thought anything would happen.

“My ex broke his nose in the accident, I broke my face. It puts (the importance of sitting safely) in perspective.”

Kealy said she continues have surgeries on her face and recently needed fat grafts to repair issues with the ceramic forehead plate.

She said: “I’m still dealing with it. I struggle with it but I can’t let it get to me.”

Kealy, who gives talks to teenagers about being safe on the road and shows them pictures of her injuries, has been honored by the Road Safety Authority, who gave her a Leading Lights award - The Gertie Sheilds supreme award- for her commitment to road safety.

Kealy was one of 17 honorees at the awards ceremony in Croke Park last week.

Liz O’Donnell, Chairperson of the RSA presented the awards saying: “Every year, we at the Road Safety Authority are delighted to be given this opportunity to recognize those doing inspiring work and ensuring the road safety message is spread throughout schools, communities, organizations and beyond.

“I want to thank this year’s winners for all they have accomplished to date.

“They are great reminders that small actions can make a big difference on our roads and can save lives – no matter how old or young you are you can make a difference.”