Up to 1,000 Irish silver miners' paupers' graves discovered in Colorado

They died among horrific poverty and dreadful working circumstances and were thrown into paupers' graves. 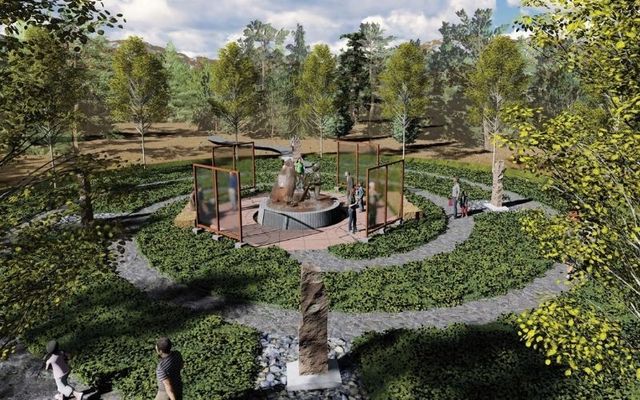 Artist's impression of a memorial in the works for the 1,000 Irish miners who died in Poverty in Leadville, Colorado. Irish Newtork Colorado

A major drive is underway in Colorado to remember and mark the resting place of up to 1,000 Irish miners, average age 23, who died in terrible circumstances in the mines there after fleeing the famine. They currently lie in pauper’s graves.

Jim Walsh, a local historian made the find in Evergreen Cemetery in Leadville, Colorado, a center of a silver boom back then, and has dedicated his working life to telling their stories.

According to Claire Cleveland of National Public Radio in Colorado, “The snowdrifts cover sunken grave plots where pine caskets have long since deteriorated. There are no headstones, just a few wooden markers and iron gates that surround child-sized plots.

“I couldn't believe that all of these people were just buried without markers. I mean they were given little wooden markers at the time,”  Jim Walsh, a historian and researcher at the University of Colorado Denver told NPR. “But it really just grabbed me and stayed with me.”

He says he saw the hidden cemetery back in 2003 while working on his doctorate.

“And I remember even saying to myself that day that I was going to make this part of my life's work,” he said. “The people who were buried there, their voices needed to be heard.”

Now a memorial is being erected with the help of the Irish Network Colorado and Evergreen Cemetery itself will be a memorial. NPR reports that “a spiral pathway will lead to the top of a mound where a sculpture will sit. It’s reminiscent of ancient Irish burial mounds. The names of each person in the plots will be carved into glass walls or onto plaques.”

Walsh told NPR that the following generations of Irish found the tale of the dead young miners too difficult to relate to as a result.

The poorest of the poor, they could not secure employment back east so went west instead. Alihies has similar mines so it was a natural place to stop,

But the horrific work schedule and bitter winters that lasted until after Spring took their toll and up to 1,000 died including many young children left destitute.

Walsh found their forgotten remains in the Catholic Pauper section of the cemetery.

NPR reports “They were too poor to be buried in a different section or with a headstone. Walsh found their names and ages, thanks to Catholic Church records. He discovered the average age of the people in the pine boxes was 23 years old, and half of them were children under 12.”

“Based on their surnames, he was able to determine that 70 percent were from Ireland, and about one."

Walsh says The Irish fled Ireland during the potato famine in the 1840s and 50s. But the people buried in Leadville who went to Leadville during the silver boom were fleeing a “mini-famine that hit West Cork, Ireland, where Allihies is.”

“They arrived hungry and desperate and unskilled and uneducated and were ostracized,” Walsh said. “Many fled to places like Leadville because they knew there was a job here for them.”

But the mining conditions were horrific. It got to 130 degrees underground and 20 degrees below in Winter. The work of extracting the ore was incredibly dangerous with mine collapses and no safety protocols. Diseases such as cholera swept the mining camps taking women and children before them as well as miners. They died among horrific poverty and dreadful working circumstances and were thrown into pauper's graves.

Walsh met Kathleen Fitzsimmons, a Leadville native of Irish origin who shared his love of Irish heritage and history.

She told NPR “If I get to the philosophical level of where this goes and why this story can speak to so many people, I think it's the continual search for something that's better that drew somebody either to a place or pushed them out of a place. That push and pull is a story that we read about throughout history,” she said.

“I think it's interesting and it's fun to find the name in the register and try to track them down. I'm really excited about the families who'll be able to come here and find their relatives and to be a part of that....”

The Irish Network Colorado is heading up the work on the memorial and is still collecting donations.

“I'm not a true Irish immigrant because I didn't do it the hard way like my forefathers did, I'm very conscious of that,” said Alan Groarke, president of the Network. “I can't live that life, that tough struggle that they did, this rite of passage. Instead, what I've been given is an opportunity to promote and facilitate having a memorial to some of my brethren, my forefathers, who came to a place to try and make a living for themselves in a new world.”

Meanwhile back In Allihies, is a museum dedicated to the history of copper mining in the area.

“It was fascinating for me to discover that there could well be my own ancestors buried in this graveyard in Leadville,” said Tadhg O’Sullivan, chair of the Allihies Copper Mine Museum. A sister city project is underway.