The Zaandam cruise ship departed from Buenos Aires, Argentina, on March 7 ahead of a month-long cruise up to Fort Lauderdale in Florida. 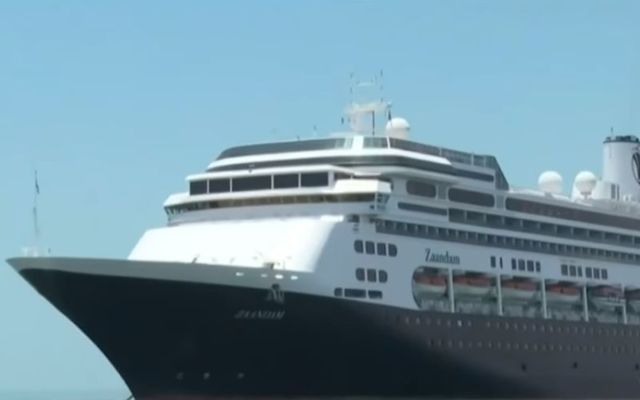 The Zaandam is two days away from Florida. CBS YouTube

As many as ten Irish citizens remain stranded on a cruise ship, now docked in Florida, due to an outbreak of COVID-19.

The Zaandam cruise ship was cleared for docking after long negotiations between cruise operator Holland America Line, local and state officials, and the US Coast Guard.

The ship docked in Port Everglades, Fort Lauderdale, according to Dean Trantalis, the city's mayor.

The Zaandam departed from Buenos Aires, Argentina, on March 7 ahead of a month-long cruise up to Fort Lauderdale in Florida.

However, some passengers began displaying flu-like symptoms on March 22 and tour organizers decided to cut the voyage short. The ship was recently denied entry into Panama and it is now making its way toward its final destination in Fort Lauderdale, Florida.  It's expected that most of the passengers from the Zaandam and its sister ship the Rotterdam will begin disembarking on Friday, April 3, 2020.

Four passengers died on board the ship and two of the deceased tested positive for COVID-19.

A number of countries in South America have closed their borders to the Zaandam amid fears of a further outbreak of COVID-19 and the ship has been at sea since March 14, when it last docked in Chile.

Ron DeSantis, the Governor of Florida, said that he would refuse to allow the ship to dock. DeSantis said that the health services in Florida were already stretched too thin by Coronavirus to take on the passengers from the Zaandam. There have been more than 7,000 confirmed cases of the virus in the state at the time of writing.

However, US President Donald Trump appears to have overruled the Republican Governor and allowed the ship to dock in a Florida port.

Trump said: "I'm going to do what is right, not only for us but for humanity."

Holland America Line warned that more passengers would die if the ship was left at sea.

Healthy patients onboard the Zaandam have already been transferred to the Rotterdam, its sister vessel, after passing medical examinations. Having said that, a large cohort of more than 1,000 passengers and crew, as of Thursday, remain on the Zaandam.

Some Irish passengers are believed to be on the Rotterdam, which is also seeking to dock in Florida.

The Irish Department of Foreign Affairs said that it is aware of the situation onboard the Zaandam and said it is in regular contact with the stranded Irish citizens.

"The Department of Foreign Affairs and Trade is aware of the situation of the MS Zaandam, which has passed through the Panama Canal and is expected to dock in Fort Lauderdale in the coming days.

"We are in regular contact with the Irish citizens on board and are providing all possible consular assistance."