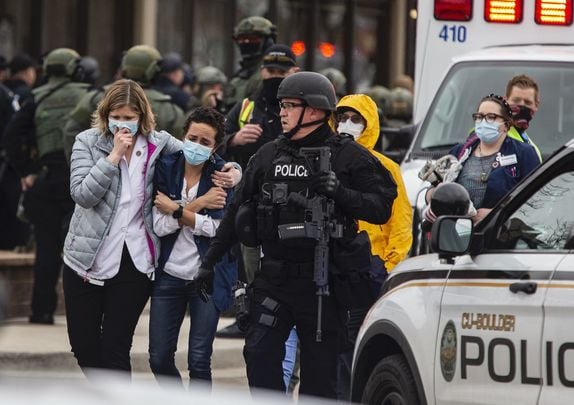 Healthcare workers walk out of a King Sooper's Grocery store after a gunman opened fire on March 22, 2021 in Boulder, Colorado. Getty

Boulder Police have released the names of ten people killed at King Sooperssupermarket on Monday afternoon by who appears to be a lone gunman.

Boulder Police Chief Maris Herold held a press conference on Tuesday morning confirming the identities of the victims aged between 20 and 65.

Listed by age the victims of this mass killing are:

Among the dead is Officer Eric Talley, the first police officer to arrive on the scene of the active shooting. The Irish American father of seven had been on the Boulder police force for ten years. Two other strikingly Irish names on the list include Kevin Mahoney and Lynn Murray.

Ten people were murdered at a store in Boulder, Colorado.

“It’s heartbreaking to talk to victims, their families. It’s tragic.”

I am heartbroken to announce that my Dad, my hero, Kevin Mahoney, was killed in the King Soopers shooting in my hometown of Boulder, CO. My dad represents all things Love. I'm so thankful he could walk me down the aisle last summer. pic.twitter.com/SLS2bdm5Hc

The prime suspect in the mass murder has been named as Ahmad al Aliwi Alissa (21). He has been charged with ten counts of murder. He was injured during the attack and was treated in hospital he will be then be transported to jail.

At 2:30 pm on Monday, March 22, a gunman began shooting in the aisles of the grocery store, King Soopers, a few miles south of the campus of the University of Colorado. Shoppers and customers ran for cover as dozen of police officers and SWAT officers responded to the crime scene.

Customers and shoppers were then led out of the back loading bag by police or sought shelter in nearby shops. Officers with tactical rifles could secure the area.

Six hours after the attack, Police Chief Herold confirmed that ten people had been killed including a police officer.

Boulder County District Attorney Michael Dougherty said, at a Monday night press conference “These were people going about their day, doing their food shopping, and their lives were cut abruptly and tragically short by the shooter, who is now in custody."

Before 4 am on Tuesday the coroner's office had identified the victims and their families were informed.

Police Chief Herold has identified the man charged with the ten murders as Ahmad Al Aliwi Alissa of Arvada. The 21-year-old is from a suburb of Denver, about 20 miles from Boulder.

DA Dougherty told the NY Times he had “lived most of his life in the United States.”

The King Soopers shooting is the second large-scale shopping in a public place within a week in the United States.

In a series of shooting in Atlanta, Georgia last Tuesday a gunman murdered eight people, all but one were women and six were of Asian descent.

In 2020, a record 41,000 people died in gun violence according to the independent research group Gun Violence Archive. This number includes over 23,000 people who died by suicide.

“Gun violence is an epidemic within the pandemic, from Boulder yesterday to Atlanta last week to the dozens more people in the United States who are shot every day, but whose stories do not make the headlines,” John Feinblatt, president of Everytown for Gun Safety told the Guardian.

“To save lives and end these senseless killings, we need more than thoughts and prayers – we need federal action on gun safety from the Senate, and we need it now.”