Ireland appeared on course for one of its most famous victories until Ronaldo scored twice in the 89th and 96th minutes to turn the game on its head and break the record for most men's international goals. 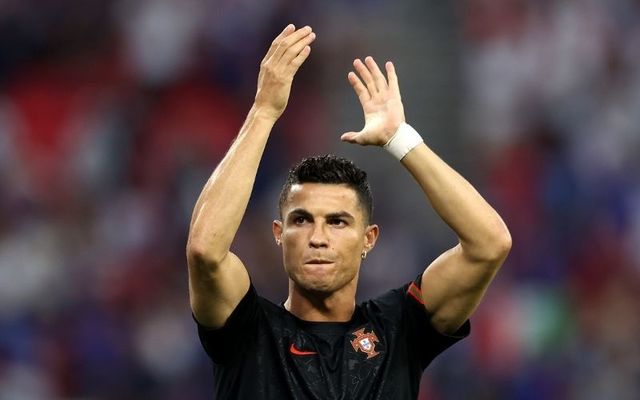 Ireland played an unwanted part in sporting history on Wednesday night when they conceded two late Cristiano Ronaldo goals that saw the Portuguese forward become the most prolific goalscorer in the history of men's international soccer.

Ireland appeared on course for one of its most famous victories until Ronaldo rose to head home his record-breaking 110th international goal in the 89th minute and draw Portugal level.

He rose above the Irish defense again in the sixth minute of additional time to score his 111th goal for Portugal and turn what would have been a statement victory for Ireland into an agonizing 2-1 defeat.

Ronaldo's goals saw him overtake Iran's Ali Daei, who held the previous record for most international goals with 109 for his country.

However, while pundits around the world lauded Ronaldo's achievement, there was nothing but bitter disappointment for Ireland, who fully deserved their 1-0 lead as the game entered the final straight.

The victory would have been one of the biggest results in Ireland's qualification history, especially considering Ireland are currently ranked 47th in the FIFA World Rankings, while Portugal are ranked eighth.

After a shaky start that saw a Ronaldo penalty saved by 19-year-old goalkeeper Gavin Bazunu, Stephen Kenny's young side grew into the occasion and started to play with bravery and composure that belied their inexperience and world ranking.

Ireland regularly caused problems for Portugal on the break and, but for a Diogo Jota header that cannoned off the post, largely had the better of an entertaining first half.

Their bravery was rewarded just before halftime when defender John Egan rose above Ronaldo to glance home a Jamie McGrath corner and give Ireland the unlikeliest of halftime leads.

Any notions that Ireland would sit back and defend their lead in the second half were almost immediately dispelled and Kenny's side gave as good as they got in the opening half-hour of the second period.

They could have had a penalty of their own when Portuguese midfielder Joao Palhinha appeared to barge Aaron Connolly in the back as he fired a close-range effort narrowly wide of the post.

Ireland tired as the game entered the final 15 minutes and retreated deeper and deeper as Portugal pressed for an equalizer, but the defensive trio of Shane Duffy, John Egan, and Andrew Omibamidele stood resolute in the face of everything that the Portuguese threw at them.

Enter Ronaldo to create a moment of sporting history and break Irish hearts.

Irish manager Stephen Kenny described Ronaldo as a "phenomenon" shortly after the last-minute defeat but said that his players deserved at least a point from the game.

"We’re kicking ourselves. It would have been the greatest result in Irish qualification history – we’ve never won away to a country like this in a qualifier. The players were magnificent overall, their efforts were something to be proud of. But it’s a hugely disappointing result, I just can’t believe we’ve lost it," Kenny said on Wednesday night.