The Irish 'ghost ship' - which came from the Royal Irish Yacht Club - was discovered off the coast of Bermuda by Matt Rutherford and his colleagues from the Ocean Research Project. 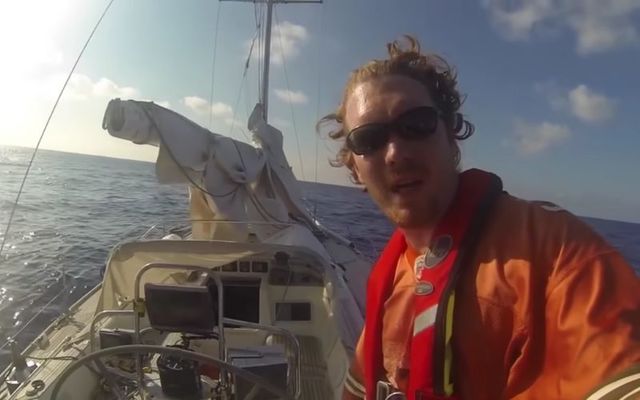 Matt Rutherford on board the Irish yacht the Wolfhound in 2013. Ocean Research Project YouTube

A sailor has shared footage of his discovery of an eerie Irish ghost ship drifting 800 miles off the coast of Bermuda.

Matt Rutherford and his colleague from the Ocean Research Project found the abandoned yacht "somewhere in the Atlantic"  in 2013, but they only recently shared footage of the amazing discovery on YouTube.

"This is one awfully abandoned sailboat - Wolfhound from the Irish Yacht Club," Rutherford said in the video.

Rutherford and his colleague noticed that the yacht's sail was not up and noted that the ship was "behaving strangely".

"I have no idea what's inside, I'm going to go and search around and I hope I don't find any dead bodies or anything," Rutherford said in the footage of his discovery of the boat.

The pair thankfully didn't find any dead bodies but found clothes and personal items strewn all over the yacht's cabin.

Rutherford and his team towed the Irish ghost ship, despite it being 48 feet while his crew's boat was only 42 feet.

"We're doing our best to try to get her to Bermuda," Rutherford said. However, after fuel and engine problems, the Wolfhound was cut loose.

The yacht was skippered by Irish sailor Alan McGettigan, who made headlines in February 2013 when he and his crew were rescued about 70 miles north of Bermuda after departing Connecticut bound for Bermuda.

According to the Irish Times, "McGettigan, Declan Hayes, and Morgan Crowe all from the Royal Irish Yacht Club (RIYC), and Tom Mulligan from the neighbouring National Yacht Club (NYC) in Dún Laoghaire, were rescued by a cargo ship when their 48-foot yacht Wolfhound suffered two knockdowns and McGettigan activated an emergency beacon pinpointing their position."