Many Irish holiday makers were caught up in the terrorist attack on La Ramblas in Barcelona yesterday. 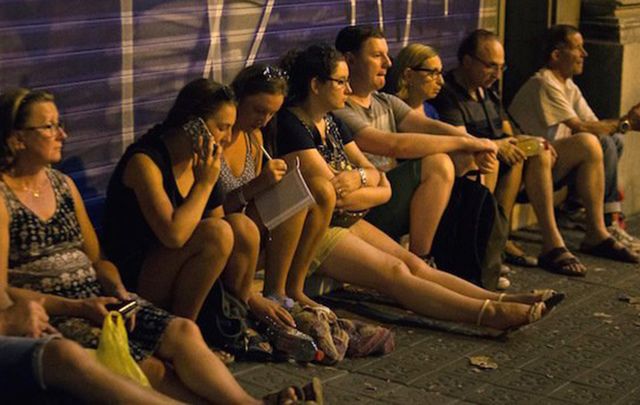 Witnesses look on after the terror attack in Barcelone yesterday in which at least 13 people died.

Details are emerging of the horrific terrorist attack in Barcelona yesterday, as Irish eyewitnesses speak of the terror on the city's popular thoroughfare Las Ramblas. At least thirteen people were killed and dozens more injured, including several Irish citizens as a white van zig-zagged up the street targeting pedestrians.

Co. Armagh native Alana Fearon was set to be flying home from Barcelona late Thursday evening but was caught up in the chaos as she ate lunch on La Ramblas.

"Police came from all angles and took everybody into shops,” the journalist said, explaining that she was still in a shuttered up a restaurant in a video she created a few hours after the terror attack.

"We just saw lots and lots of tourists running down La Rambla, which is obviously the busiest area in Barcelona. We thought that initially that it was pickpockets because we had been warned and we thought the police were coming after them.

"We saw up to 13 police vans, riot police, flying past us in vans. Doors open, rifles. We were sitting at one of the bars in the middle of the strip.Everyone was asking 'what happened?' There were no ambulances initially. We didn't understand what happened. A police car came up.

"Everybody started screaming"– eyewitness after several injured as van crashes into people in Ramblas, Barcelonahttps://t.co/w7nva15D4o pic.twitter.com/6FFaUcayte

"A policeman with a megaphone was hanging out the front of the door and telling everyone to get inside. We were put in the bar where we're staying and the shutters were put down and everyone was very upset,” Fearon continued.

"We were initially very, very scared as we were supposed to be in Placa de Catalunya. That's where the airport bus goes from, so it would have been a very busy square. But we decided to sit on and get a taxi so we didn't go up to it. We're currently still locked inside our restaurant, the shutters are down.

"There's a police cordon all down the strip. I don't know if we're going to be able to get our flight this evening. Not everybody has been allowed to come in from outside, some are just standing on the road. We don't know if it was an accident or if it was an attack.

“All I can see now is police in high vis vests and bulletproof covers walking up and down the strip."

Speaking to TheJournal.ie, Aoife Roy was also sitting at a restaurant with three friends on Las Ramblas when the terror attack occurred. On the first days of their vacation to the city, Roy and her friends had been sitting at the back of the restaurant and didn’t see what happened. The group hadn’t initially realized what was going on until they were approached by a waiter who told them that they would not be able to leave.

“We were completely clueless… No one knew what was going on,” she said.

“We thought it must not have been that serious because people were standing around looking at their phones trying to find out what happened.”

Once the shutters were raised on their restaurant, the group were directed away from the area by police but were forced to double back around as they were staying in an apartment near La Ramblas.

#Barcelona eyewitness: We all feel like we have to be on guard; he says he felt like "las Ramblas would be next" https://t.co/PGKPpZDZJc

“This was our first day here so we didn’t know our way around and weren’t sure where our apartment was. We were lucky we happened to turn onto the right street,” she continued.

While they were supposed to remain in the city until next Monday, one of her friend's parents wishes for them to return home.

“We have friends who live in Barcelona and they’ve been offering their homes to us, which has been heartwarming,” Roy added.

The Irish Travel Agents Association (ITAA) has urged Irish holidaymakers to exercise a high degree of caution and to follow all the advice of the local authorities if traveling to Barcelona over the next few days.

"My daughter was in the Bataclan" says eyewitness caught up in terror attack in Las Ramblas, Barcelona​.

“We are deeply saddened by the news of the terror attack in Barcelona yesterday. On behalf of the ITAA, I wish to convey our sincere condolences and solidarity with people of Barcelona and Spain. Spain and Ireland have been important tourist partners for many years. This year, almost two million Irish citizens will visit Spain making it Ireland’s most popular holiday destination,” said Cormac Meehan, President of the ITAA.

“Our advice to Irish holidaymakers in Barcelona or intending to travel to Barcelona is to exercise a high degree of caution and to follow all the advice of the local authorities.

“Passengers are likely to experience disruption and delays and are advised to stay in touch with their travel agent, carrier airline or tour operator.”

An Irish couple, both naturalized Irish citizens born in the Philippines, and their two Irish children were among the holidaymakers on the historic boulevard when the attack took place. Their son, who was celebrating his fifth-birthday, suffered a broken leg and his father also sustained leg injuries and suspected internal injuries.