Where to find the best Irish breakfasts in Ireland (and some recipes, too!)

The Irish Breakfast Awards line up our bucket list spots for a full Irish in the coming year. 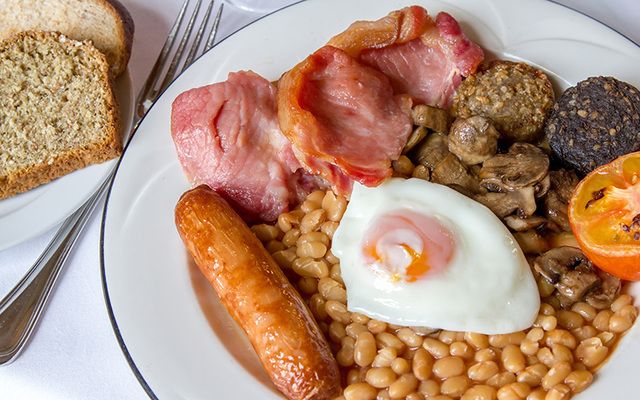 Breakfast may be the unsung hero of the Irish food scene, but the popularity of a traditional full Irish or fry-up, along with American-style brunch, continues to grow.

Yet how often do you see a breakfast review in a weekend restaurant column? Georgina Campbell, president of the Irish Food Writers’ Guild, asked that question herself when she spearheaded her “Irish Breakfast Awards” and honored the winners in Dublin a few weeks ago.

Campbell’s awards were created for the purpose of creating a benchmark system to motivate the industry to raise the standards of the Irish breakfast experience.

“A flavorsome rendition of the traditional breakfast plate, together with wholesome accompaniments including Irish soda bread and good Irish butter,” was what the panel of independent assessors was looking for, according to news from the awards committee.

“We need to stop taking the Irish breakfast for granted and let this simple meal be cause for celebration itself,” said Campbell.

And so it is that the awards honored three-, four- and five-star hotels, country houses, guesthouses, bed and breakfasts, and food producers who contribute products to the most important meal of the day.

At the highest end of the scale, The Merrion, Dublin, triumphed for its “range, consistency, and seamless service,” with its baked goods and charcuterie board “showcasing both Irish and international meats and artisan cheeses.”

The best four-star hotel breakfast was served at Ballynahinch Castle, Recess, Connemara, where the judging panel said: “breakfast is a high point of the experience” and noted the full baked ham on the buffet table and other breakfast foods made from the hotel’s own rare breed pork. Gougane Barra Hotel, Macroom, County Cork, took the three-star honors, with mention of “the breakfast meats from Twomey’s craft butchers” and the proprietor’s “rich walnut and treacle bread.”

Renowned Ballymaloe Country House in County Cork triumphed in the country house category for its “fresh, local, and seasonal ethos, its Bircher Muesli made with their own apples, and cooked breakfast made with Ballymaloe farm eggs, bacon and sausages.”

You can find a full rundown of the winners here and look below for some recipes from some of the best:

And now for some recipes, you can recreate at home!

If you’re looking for luxurious accommodations and fine dining in the heart of Connemara, Ballynahinch Castle is the place for you. Set on a private 450-acre estate of woodlands, rivers, and scenic walks, the authentic and unpretentious castle hotel claimed the top prize for four-star properties in Georgina Campbell’s recent breakfast awards. The hotel is pleased to share its recipe for these fruit-and-nut-filled muffins, one of the most popular items on its breakfast buffet.

Make muffins. In a large bowl, sift together flour, baking powder, cinnamon, and salt. In another large bowl, whisk together eggs, oil, sugar, and vanilla. Stir in carrots, apple, pecans, sultanas, and coconut; fold in flour mixture (do not overmix).

Spoon batter into prepared pan and spoon topping over each. Bake for 30 minutes, or until a skewer inserted into the center comes out clean. Remove from oven and let cool for 10 to 15 minutes before serving (flavor improves after 1 to 2 hours).

In addition to wonderful service, a relaxed atmosphere, and congenial proprietors Michael and Geraldine Rosney, Killeen House Hotel in Killarney also serves a mean breakfast. The small hotel, highly commended in the three-star hotel category, prides itself on its flexibility when it comes to breakfast, so whether you’re a golfer rushing out for a tee-time or a traveler hurrying off to a day of touring, you can enjoy a “To-Go Irish Breakfast Sandwich” that’s become “the stuff of legend” for those who’ve had the pleasure of partaking in it.

Outside of the normal ingredients of Irish bacon, organic eggs, and locally-sourced sausages, the secret ingredient in the breakfast special is this tangy tomato relish, shared with Echo readers for the first time in 26 years! Thank you, Michael and Geraldine.

In a large saucepan over medium heat, combine tomatoes, onions, sugar, mixed spice, orange juice, and zest. Bring to boil, and then reduce heat and simmer, uncovered, stirring frequently, for 40 to 45 minutes, or until mixture thickens. (As skins separate from tomatoes, remove and discard). Adjust for taste, adding additional sugar for sweetness or vinegar for tartness.

Bring to boil, and then reduce heat and simmer, uncovered, stirring frequently, for 40 to 45 minutes, or until mixture thickens. (As skins separate from tomatoes, remove and discard). Adjust for taste, adding additional sugar for sweetness or vinegar for tartness.

Adjust for taste, adding additional sugar for sweetness or vinegar for tartness.

Let cool, and then spoon into clean jars; cover and refrigerate for up to 2 weeks.

Margaret Johnson’s “Recipes” page expands this year to “Ireland Hopping: Adventures in Food, Drink, and Travel.” For further details on her work, or to order a signed cookbook, visit www.irishcook.com.