Not for the fainthearted - Irish American labor leaders

Trade union leaders of Americare unashamedly tough ambassadors of labor who are wholly fearless when it comes to facing down the juggernaut forces roiling workers’ rights across the US. 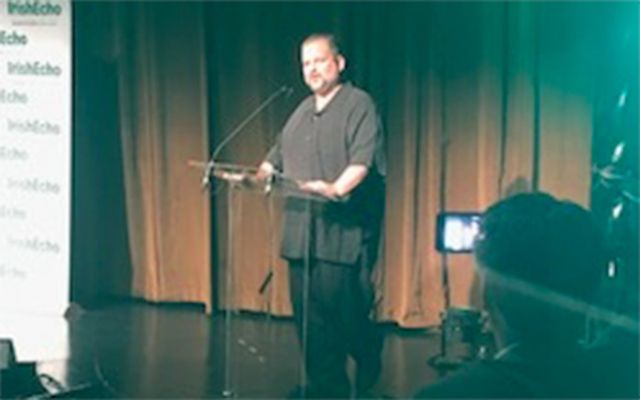 As you might expect, a night with the trade union leaders of America requires a hard hat.

For these are unashamedly tough ambassadors of labor who are wholly fearless when it comes to facing down the juggernaut forces roiling workers’ rights across the US.

No-one epitomises their fiery spirit better than the Irish Echo Labor Leader of the Year John Samuelsen (above) who heads the powerful union which represents subway and bus workers across the Big Apple — and further afield.

In an emotive closing speech at the Friday night gala, which gave a fascinating glimpse into the wondrous and beautiful soul of Irish America, he spoke about growing up in Gerritsen Beach, Brooklyn. “Many of the people there have never been to Ireland and they have no intention of going,” he said. “But ask them what they are and they’ll say, ‘I’m Irish’.”

Like the Labor celebration itself, Gerritsen Park wasn’t a place for shrinking violets. “It’s best captured in the story of a guy going to mass who saw two men trading blows on the street. He went over to them not to stop the fight but to ask, ‘is this a closed fight or can anyone join in?’.”

John Samuelsen has a unique link to Ireland: his mother was born in Derry. He remembers her returning from a visit to the homplace in the seventies with a rubber bullet to show her ten-year-old son what “the British Army was shooting at his cousins”. Later he was seared by the hunger strikes of 1981. He now holds one of the most revered positions in Irish America as President of the TWU transit union, a position once held by legendary Irish rebel Mike Quill who organized the first subway workers’ union in New York in the thirties.

Big shoes to fill, undoubtedly, but as LiUNA President Terry O’Sullivan, told the sold-out Irish Labor event in midtown Manhattan, John Samuelsen is “a champion of justice” who has “focused his fighting Irish spirit on advancing the causes of both Ireland and Labour”. He added of all 11 honorees: “They follow in the footsteps of the Fenians, of the heroes of 1916 and of all the great Irish labor leaders on both sides of the Atlantic.”

Among the no-nonsense trade union leaders from across America at the New York gathering was Belfast native Robbie Hunter who has traded blows with scabs on the building sites of Los Angeles alongside honouree Kevin Norton. Norton, himself, is not to be messed with: in his free time, he plays in punk rock band Eulogy. In fact, you can hear his new EP here.