Philanthropic network has raised $226,203,685 for Irish charities and causes worldwide. 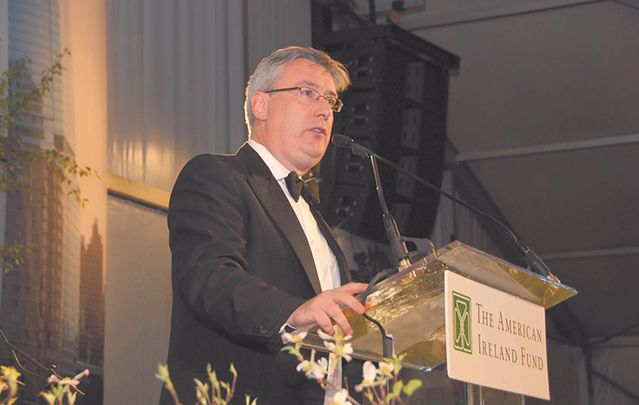 Kieran McLoughlin, President and CEO of The Worldwide Ireland Funds

The Ireland Funds have announced they have raised $226,203,685 through their Promising Ireland Campaign to assist Irish charities.

At its Annual Rugby Luncheon in Dublin, Kieran McLoughlin, President and CEO of The Worldwide Ireland Funds, announced that $226, 203,685 had been raised to support the work of over 900 outstanding Irish not for profit organizations.

The Campaign, effectively an intensification of fundraising, ran from 2009 to the end of 2015 as a response to the increased demand for services from the Irish nonprofit sector at a time of a major reduction in resources. The Campaign's title - Promising Ireland – was chosen to reflect The Ireland Funds' pledge to these groups as well as a belief in Ireland's future.

The Promising Ireland Campaign was launched with a goal of raising $100 million. When that initial goal was reached ahead of schedule, the Campaign’s goal was doubled to $200 million. All funds raised have come from private philanthropic sources around the world. In total, over 11,000 donors from the 12 countries in which The Ireland Funds are active contributed to support Irish charities and causes worldwide.

Commenting, McLoughlin said “It is marvelous to witness the power of private philanthropy and its capacity to achieve lasting impact for the public good. Our donors truly stood up for Ireland at a crucial time when the not for profit sector was, in many ways, maintaining Ireland’s social fabric.”

“However the story of The Ireland Funds is not told through numbers, it is told through the impact on Ireland. The Ireland Funds will continue to build on the momentum of the Campaign to further increase their support of Irish non-profits that are carrying out programs of peace and reconciliation, arts and culture, education, and community development around the world.”

Reflecting on the Campaign, American Ireland Fund Chairman, John Fitzpatrick, said, “Through the Campaign, our donors showed their commitment to and belief in Irish charities. The work these do was crucial in helping people through a very difficult period. We are proud of the projects we support and of our donors. Their generosity demonstrates the difference philanthropy makes.”

The Ireland Funds are a philanthropic network across 12 countries that has raised over $500 million for worthy causes in Ireland and Irish causes around the world. It is the largest network of friends of Ireland dedicated to supporting programs of peace and reconciliation, arts and culture, education and community development. Founded in 1976, The Worldwide Ireland Funds have benefited over 3,000 organizations. Funds raised are contributed by private sources, individuals, corporations and foundations.