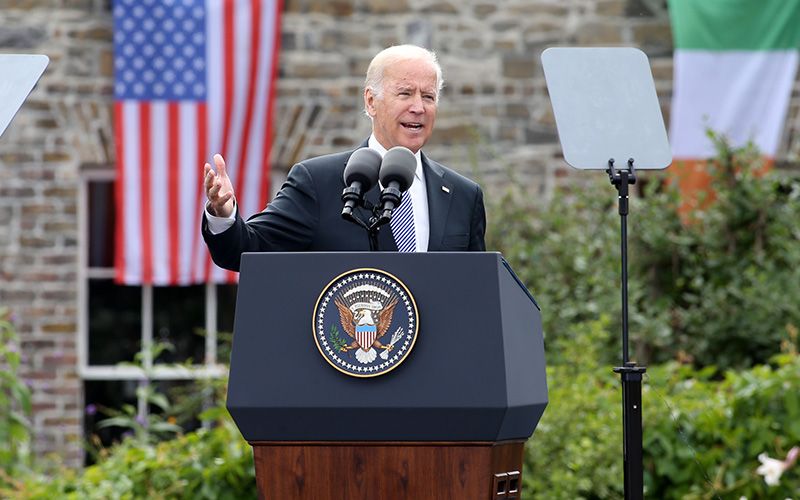 The Worldwide Ireland Funds took their annual conference to Dublin this week and it turned out the timing could not have been better.

It just so happened that Vice President Joe Biden was in town and his attendance at the Friday night gala dinner, also attended by Prime Minister Enda Kenny was a great coup for the organization.

Biden was deeply emotional in his  remarks and deeply personal. Coming to Ireland with many members of his family fulfilled a dream for the Vice President who spoke eloquently of his Louth and Mayo roots and the long journey home that descendants of the Blewits from County Mayo and the Finnegans from County Louth had made to rekindle those same roots.

It was an emotional moment as Biden, the descendant of two shoemakers, Owen Finnegan and Patrick Blewett, returned to the land they had left and that he returned to as Vice President of the United States. Perhaps the anti-immigrant force out there might reconsider their sentiments if they knew more about such amazing stories.

Then there was the minor matter of Brexit which struck like a thunderbolt across the British and Irish horizon. It was the focus of conversation at every Ireland Fund event and being on the ground and understanding the Irish reaction was invaluable.

The key question on how it will impact the Northern Ireland peace process and the US investment in Britain and Ireland was thoroughly discussed at a plenary session before the 300 delegates by Senator George Mitchell, hero of the peace process among others.

Then there was the Irish victory over Italy in the European championship which unleashed a delirium of celebrations throughout the land.

Ireland Fund members, gathered in Killiney Castle, the property of the family of Ireland Fund president John FitzPatrick on the night in question were able to join in the celebrations too.

Word was the roar when the Irish scored the key goal could be heard back in Dublin City.

The 200 attendees from 19 different countries reflected the power of the Diaspora, especially the American component, where 85 percent of the funds are raised.

Like the Irish soccer team itself which featured a black goalkeeper the son of an American immigrant to Ireland and several English-born players the Ireland Fund membership is a unique wordwide mix unmatches by any other Irish organization. No fewer than nineteen delegates had come from Australia where a burgeoning Ireland Fund is building. From London came Elgin Loane, Owner of the irish Post the flagship of the irish community there while former Ireland Fund chairwoman Loretta Brennan Glucksman headed the American delegation. Singapore, China, Canada, Europe were among the other reps present, making for a truly global feel.

It was the 40th Anniversary of the Fund and the evident price if raising over half a billion dollars for Ireland over that period was well reflected.

CEO Kieran McLoughlin and newly re-elected Chairman John FitzPatrick were adamant that the best times for the organization lie ahead despite its amazing contribution.

A clear indicator of that was the lunchtime visit to Facebook headquarters in Europe in what used to be a decrepit dockland area but which now has been transformed.

The connection with Facebook and the new emphasis on seeking different sources for fundraising for Ireland such as Silicon Valley was very clear.The Ireland Fund continues to grow and at such uncertain times such as Brexit and an American election that could bring its own upheaval, the fund remains a solid beacon for Ireland in a sea of sudden instability.

As Joe Biden stated, the fund has become the worldwide flagship of Ireland doing its job of promoting and helping the country across the globe.

There could be no greater compliment than that.