A 6.9 magnitude earthquake has rocked the Indonesian island of Lombok, killing at least 98, and injuring hundreds more. Airlines are now adding flights as tourists cut holidays short and islands are evacuated. 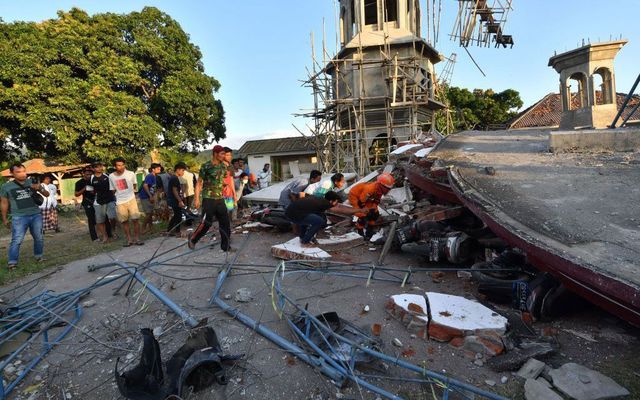 Residents an Indonesian search and rescue personnel look under the ruins of a mosque in Pemenang, North Lombok on August 6, 2018, the day after a 6.9 magnitude earthquake struck the area. - More than 1,000 tourists were being evacuated from Indonesia's tiny Gili islands on August 6 after a powerful quake struck neighboring Lombok, killing 91 people and injuring hundreds ADEK BERRY/AFP/Getty Images

A second powerful earthquake in a week has struck the Indonesian island of Lombok causing scenes of destruction and prompting an exodus of tourists.

Irish tourists were among the thousands evacuated after a 6.9 magnitude earthquake rocked the Indonesian island of Lombok on Sunday evening. This was the second large quake in the space of a week to hit the popular destination for travelers and backpackers, a 6.4 magnitude tremor killing 17 last week.

The death toll has risen to 98 as rescuers continue to search for people among the rubble.

"The number of fatalities will definitely rise because some victims have not been found or rescued," said National Disaster Agency spokesman Sutopo Purwo Nugroho.

Rebecca McConnell, 26, was on nearby Bali when the earthquake struck and spoke to the Irish Independent about the “sheer terror” she felt as Sunday evening's quake hit. Although the tremors were not as greatly felt in Bali, two people have been confirmed dead and many buildings have been destroyed.

“Severe terror entered my body and for a few seconds, I was frozen, trying to remember what to do in this type of emergency. I then followed suit of the locals and headed outside the building,” McConnell, who is traveling in Bali for three weeks, said.

“I know all earthquake routines tell you to stay inside and get under the table, but I figured the structure of this particular building did not look stable. The tremor lasted for around 20 seconds, then there was an aftershock around an hour or so later, which lasted for about 5 seconds.

At least 91 people were killed and hundreds were injured after a powerful earthquake hit resort islands in Indonesia. pic.twitter.com/DViqwLozmV

“Being from Ireland, this was my first experience of a natural disaster and it was terrifying. I’ve never felt fear like that before. I made sure to message home to let my parents know I was OK, as during the previous earthquake we had no signal and they were worried sick.

“I got talking with a local and he explained how Indonesia is in the ‘ring of fire’ and therefore prone to earthquakes. He then told me about the 2004 earthquake that triggered a tsunami killing 200,000 people.”

Irish woman Patricia Mulraney, 25, was among the 1,200 tourists evacuated from the nearby Gili Islands, which lie a few kilometers off the northwest coast of Lombok. She described the panic to get off the island with overcrowded boats setting off for Lombok and injured passengers being pushed off. While the injured were due to be evacuated the island first, she spoke to a man with a head injury sitting in a wheelchair who claimed to have been pushed from a boat

At least 91 people have been killed and more than 120 aftershocks recorded after a 6.9 magnitude earthquake hit Indonesia's Lombok and Bali islands. https://t.co/v6nvFL7giA pic.twitter.com/WotdQgW6ep

Mulraney added that rumors were also circulating the island that a stronger earthquake was set to hit on Sunday night adding to the panic, despite the Meteorology, Climatology, and Geophysics Agency warning that this was only a small possibility.

The Irish Department of Foreign Affair has said that no Irish were among the casualties.

"The Department through the Embassy in Jakarta supporting a number of Irish citizens intending to leave the affected area,” said the statement.

“We are liaising closely with the Indonesian authorities to seek to ensure all Irish citizens can travel safely.

"The Consul from the Irish Embassy is traveling to Lombok to provide direct support to Irish citizens. The EU has set up a common consulate support center at Lombok airport and we will continue to monitor the situation."