The men, who had clung to the capsized boat for 13 hours in choppy seas, were lifted out of the water. 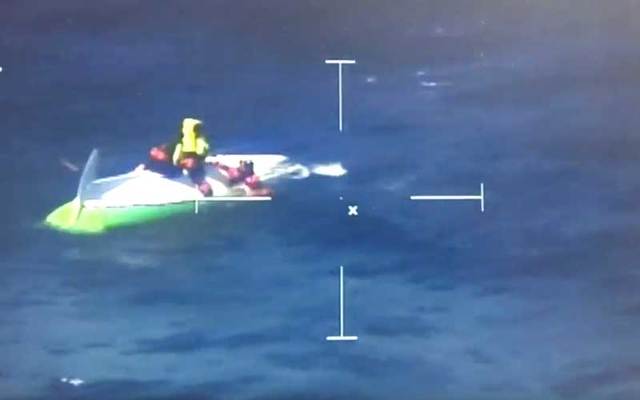 Snapshot of footage of the rescue of two men attempting to row across the Atlantic. Twitter/@IrishAirCorps

The Irish Air Corps has released incredible footage documenting the rescue of two men whose boat capsized in the Atlantic.

Brian Conville, 25, from Dublin and Joseph Gagnon, 20, from Quebec, Canada, were attempting to row across the ocean from Canada and ran into trouble near the coast of Ireland. They were found 165 miles from Mizen Head, Cork, on Friday.

When the boat capsized, the rowers' emergency position indicating radio beacon, known as an Epirb, was set off, raising the alarm. Conville and Gagnon clung to the boat for 13 hours in choppy seas.

The men were winched to safety by an Irish Coast Guard helicopter crew. The mission was carried out by the Sikorsky Rescue 117 helicopter based in Waterford.

The Irish Air Corps called the radar in their CASA C253 “invaluable” in helping them locate the men.

The footage shows the two men being lifted out of the water. They were brought to Tralee Hospital in Co Kerry and suffered only from a bout of mild hyperthermia.

Conville and Gagnon, who rowing west-east across the Atlantic, left St John’s Newfoundland on June 13. The men were attempting to set the record for being the youngest pair to complete the voyage from Canada to Ireland.

The Irish Coast Guard's search and rescue manager Gerard O'Flynn praised the work of the helicopter crew, officials at the incident control offices on Valentia, and the Irish Air Corps, which provided top cover support.