William Meara (26) and Craig Reynolds (24) are currently traveling the world and chronicling their backpacking adventure via their blog Ready for Road. 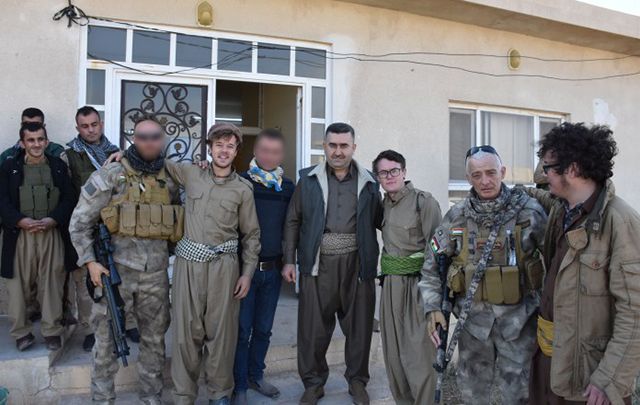 Two young Irish backpackers traveled into Iraq this month, and found themselves at the frontlines of the fight against ISIS after befriending a Kurdish Peshmerga fighter during a night out in a Kurdish bar. William Meara (26) and Craig Reynolds (24) are traveling the world and chronicling their backpacking adventure via their blog Ready for Road. In the latest installments on the travel blog they tell of a nerve-wracking excursion within 1000' of ISIS flags after making the decision to chance their luck at traveling through Iraq.

The pair have spent the past year on the road. They only plan their route through each country as they come to it. In early December Meara and Reynolds found themselves in Iran, joking about continuing through to Iraq. However, the joke soon evolved into a mission to get themselves on the other side of the Iraqi border.

Their last stop in Iran was in Marivan, 30 miles from the border with Iraq. They wrangled a ride to the border and soon found themselves in a a huge gated border-control compound, where they underwent several rounds of bewildering questioning as to why they wished to journey to Iraq. And that was to leave Iran.

After a similar round of questioning and further checks of documentation, the two Irish men were in Iraq, walking into the desert with a sign for the nearest city. They hitchhiked and later caught a bus to the the outskirts of Sulaymaniyah, Iraqi Kurdistan’s second-largest city, and the most liberal and westernized city in Iraq.

Craig & Will in their Peshmerga uniform. Image: Ready for Road.

They were in an internet cafe and had no idea what awaited them or what their next move should be when they were approached by a large man, who, after an awkward exchange, handed them a phone. On the other end was a man named Shalaw who had better English and who invited them out for the night.

After a night of heavy drinking, Meara and Reynolds awoke with more than just a hangover. They had been invited to visit an active war zone where the Peshmerga, a Kurdish militia, is battling Islamic State. After reuniting with Shalaw and the first man, who turned out to also be named Shalaw, they were in the back of a van, storming towards the town of Chamchamal where they collected their Peshmerga uniforms.

They make a nervous arrival. Image: Ready for Road.

They passed many refugee camps as they made their way from checkpoint to checkpoint with their new companions, who insured that they were quickly passed through each checkpoint as they approached the final barricades.

“We were informed that all the high profile military officials were meeting at an urgent summit about bolstering the defensive support around Kirkuk, the city recently taken back from ISIS but that has seen several bombings recently,” Meara writes.

The outpost from a distance. Image: Ready for Road.

“Trucks of armed soldiers were swarming the area, hurtling by us in their dozens.”

Describing themselves as “[n]ervous, intimidated and shaking” as they were invited to meet the general at the military base, Meara and Reynolds were also greeted by foreign volunteer fighters who could tell them more of the situation.

“He told us about the face-to-face fights he’s had with ISIS, the way they fight and how the war has become a defensive offense where he’s been based. He gave me a walk through of his weapon and soon gave a grim description of what has been happening. Several photos with soldiers, the general and we were asked to leave,” Meara continues.

After leaving the base the Irish pair were brought on through embankment after embankment before they could see ISIS flags a few hundred yards in the distance. They were at an outpost where, Meara says, three soldiers have been killed by ISIS snipers in the last three months.

Will peering over the sandbags of the bunker where 3 soldiers were taken out by ISIS snipers in the last three months. Image: Ready for Road.

“We were shaking with a potion of nerves and bewilderment as to how and why we got here,” he writes.

The Irishmen were eventually pulled from the outpost, said goodbye to their companions and were brought back to Sulaymaniyah. The way they were greeted by the Kurdish people had a lasting impact on Meara.

“The Kurdish people are some of the nicest people I’ve met on my travels and despite the imminent danger, they entertained us, smiled and welcomed us in open arms,” he said.

“They’ve been given a rough history in recent times and despite it all, you’ll always be greeted with a smile that would warm the sun.”

The Irish travelers have been criticized by Irish security analyst Dr. Tom Clonan. Speaking to the Irish Independent, Clonan was concerned that several governments will now be interested in speaking to the country-hopping pair as a result of their experience on the frontline.

Traveling back from the outpost. Image: Ready for Road.

"It's because of their proximity to a group that is operating in combat in Iraq," Dr. Clonan told the Irish paper.

"I would be very nervous of posing for a photograph with weapons in an environment where combat is taking place.

"It's just naive. They shouldn't be doing that," he added.

The young travelers have answered criticism regarding travel to the Middle East in their latest blog entry, in which they discuss the reasons why people should venture to these places despite “the the image of suicide bombers, social paranoia, war zones, ruins, deserted villages and extremely hostile migrate issues” that they feel has been hyped up by western media.

“We’ve spent the last three months backpacking, hitch-hiking and 'Couchsurfing' our way through some of the most notorious locations on the face of the planet and we want to clear up a few things and encourage you to make a journey on your own!” they write. The welcoming nature of the people, the landscapes, the culture and the food are as some of the top reasons they would recommend the Middle East and South Asia.

You can read more of Meara and Reynolds travel adventures and more of their experience journeying into Iraq via Iran and and their visit to the forces fighting ISIS on the front lines on their blog Ready for Road.