One of the six men in the iconic World War II photo of the U.S. flag being raised over Iwo Jima has been identified as an Irish American from Iowa. 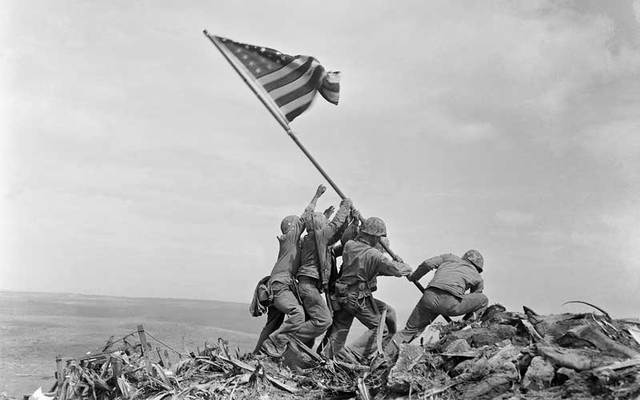 One of the six men in the iconic World War II photo of the U.S. flag being raised over Iwo Jima has been identified as an Irish American from Iowa.

The Pulitzer Prize-winning image of six Marines raising the flag atop Mount Suribachi was captured by Associated Press photographer Joe Rosenthal. After a five-week battle between U.S and Japanese forces for the island, the U.S. won Iwo Jima on Feb. 23, 1945.

Earlier this month, the Marine Corps acknowledged that one of the six fighting men in the photograph has been misidentified for 74 years.

Using film footage and photos taken by other soldiers who were at the scene, three historians have concluded that Cpl. Harold "Pie" Keller of Brooklyn, Iowa, and not Pfc. Rene Gagnon, was one of the flag-raisers in the photograph.

The findings of historians Stephen Foley, Dustin Spence and Brent Westemeyer were confirmed by a special investigative board convened by the Marines and by investigators from the FBI's Digital Evidence Laboratory, NBC News reports.

This correction is the third change in the official identifications of the men in the photo. Until 1947, Cpl. Harlon Block was misidentified as Sgt. Hank Hansen, and Cpl. Harold Schultz was misidentified as Hospital Corpsman John "Doc" Bradley until 2016. The other men in the photo are Pfc. Franklin Sousley, Sgt. Michael Strank and Cpl. Ira Hayes.

"I was shocked when they contacted me to tell me one of those Marines was my dad," said Kay Maurer, one of Keller's three children. "I knew my dad was there, but he never said anything about being in that picture. He rarely talked about the war at all."

Keller was born in Brooklyn, Iowa, and, except for during the war, lived his entire life there.

A high school football player, he earned the nickname “Pie” because he ate too much pie before a game and threw up on the field in front of the crowd.

He worked as a telephone company linesman before enlisting on Jan. 2, 1942, and trained at Camp Elliot in San Diego and in Honolulu.

According to MSN, Keller was assigned to Carlson's Raiders, an elite amphibious Marine unit. In less than eight months after enlisting, he landed at Guadalcanal at the start of the Allied offensive in the Pacific. The battle would last more that six months. He later fought in a ground campaign at Midway Island and another in Bougainville. At Iwo Jima, he was part of a 40-man platoon that earned 26 medals in 46 minutes, the majority of them Purple Hearts.

In 1944, he took a furlough and married Ruby O’Halloran. The couple would have three children, two boys and a girl. After the war, Keller returned to work at the phone company he worked at before the war. He would later take a job at a local creamery, and after that closed, he worked at an electrical equipment firm. He also served as head of Brooklyn High School’s athletic boosters and as chief of the city’s volunteer firefighters.

"Regardless of who was in the photograph, each and every Marine who set foot on Iwo Jima, or supported the effort from the sea and air around the island is, and always will be, a part of our Corps’ cherished history," said the Marines' statement.. "In the words of General David H. Berger, Commandant of the Marine Corps, 'they are all heroes.'”