The Guinness Storehouse at St. James’ Gate in Dublin has received a welcome boost in tours since the historic vi... 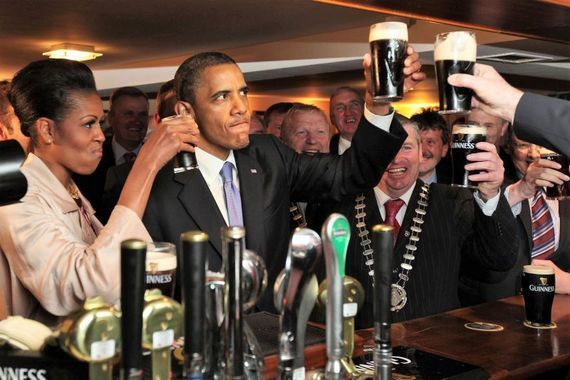 The Guinness Storehouse at St. James’ Gate in Dublin has received a welcome boost in tours since the historic visits of both President Barack Obama and Queen Elizabeth II this past May. Figures show that with 1,025,677 people going to visit the Storehouse this year, sales have jumped 10 percent, making the Storehouse Ireland’s number one fee-paying tourist draw.

The Belfast Telegraph reports that Paul Carty, managing director of the Storehouse, believes the jump in tours is related to the high-profile visits of this past year. "All eyes were on Ireland during the high profile state visits of US President Barack Obama and Her Majesty, Queen Elizabeth II last May and this had a positive impact on our visitor numbers," said Carty.

Carty also notes that he believes one in every two tourists in the capital city have the Guinness Storehouse included as a stop in their travels.
_____________________
Read More:

Guests of the nation: Queen Elizabeth, Obama, Ireland's history and its future

"A very successful St Patrick's Day festival and the launch of Five, an entirely new experience dedicated to Guinness and food at the Storehouse also contributed to helping us achieve our second highest footfall figures ever recorded,” added Carty.

Connolly believes that if the Storehouse can continue this upswing in momentum throughout 2012, that not only the Storehouse itself, but the Irish tourism economy could benefit.

"That will be good for tourism and great for our economy,” he said.

Below, catch Queen Elizabeth II learning how to pour the “Perfect Pint” at the Gravity Bar at the Guinness Storehouse:

Here’s the best advertisement in the world for Guinness President Obama drinking down a pint of plain: