The dismembered body of a grandmother was discovered in eight different locations in the Wicklow Mountains. 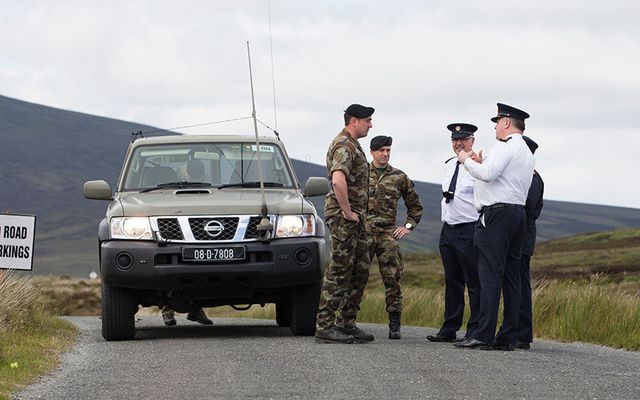 Gardaí search for further remains in the Wicklow Mountains. RollingNews.ie

A man in his 30s has been arrested following the discovery of human remains in eight different locations in the Wicklow mountains. A partial torso was discovered by walkers on Saturday afternoon leading to a search involving over 200 members of the Gardaí and Irish army before a man presented himself for arrest in Wexford in relation to the murder.

While initially believed to be the body of a man in his 20s, the deceased has been named locally as Patricia O’Connor, a grandmother from Rathfarnham in Dublin City. It is believed she was killed by a man known to her by being hit over the head with a blunt object before her body was dismembered with a power tool and scattered throughout the Wicklow mountains.

A 32-year-old man presented himself to Gardaí in Co. Wexford on Tuesday night after wide media coverage of the discovery and is now being held in Bray, Co. Wicklow, where he can be questioned for 24 hours.

The initial discovery by tourists was made on Saturday night, revealing the body was that of a woman once DNA tests were carried out. Further remains were discovered over a 30km radius on Tuesday including a head and hands found in a plastic bag. The police believe they have now discovered all of the remains.

Army called in to search for the body. Image: RollingNews.ie

"We are conscious of the fact that the body found is that of a loved one," said Superintendent Pat Ward from Bray Garda Station.

O’Connor, a grandmother and mother of two, is believed to have been in her late 50s and worked as a chef at Mount Carmel Hospital in Churchtown, Dublin. It was not believed that she had been reported missing when her remains were found.

Her body was found in eight locations along an isolated stretch of the Military Road in the Wicklow mountains near Enniskerry, between the Sally Gap and the village of Laragh. It is reported that her killer initially tried to bury her body in Wexford but panicked and drove from Wexford in the direction of Dublin scattering her remains. Gardaí are said to be shocked by the gruesome killing that involved the body being cut into very small parts.

O’Connor is believed to have been killed within the last two weeks. Gardaí are currently reviewing CCTV footage and are appealing for information from anyone who may have been in the area, especially those with cameras or dash cams, in the past two weeks.

“This has been a very complex investigation for us and very unusual in the manner of the investigation,” said Ward of the inquiry. “With each find we have made significant progress and now have new information and have developed a more complete picture.