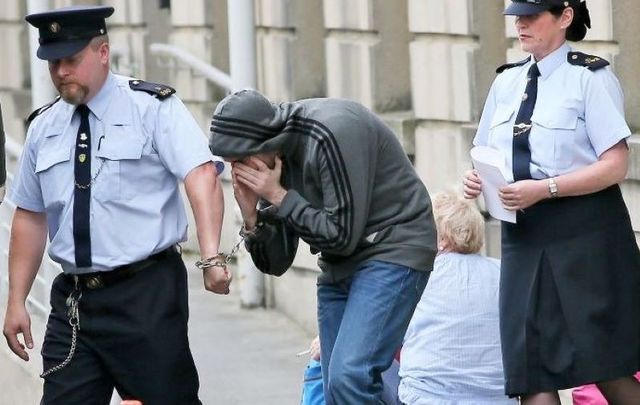 Eric Eoin Marques ahead of his extradition from Ireland to the United States in 2013. RollingNews.ie

An Irishman described as the world's largest purveyor of child pornography is set to be handed a 27-year prison sentence in US prison.

Eric Eoin Marques, 36, pleaded guilty to conspiracy to advertise child pornography in February 2020 as part of a plea deal that would see him serve between 15 and 21 years in federal prison.

However, the plea deal fell apart in May after a Maryland judge ruled that it was unclear if the sentence would include the six years that Marques spent in custody in Ireland while fighting his extradition to the United States.

Marques admitted to distributing child pornography on an anonymous web hosting service between July 24, 2008, and July 29, 2013, as part of the plea deal.

Marques allegedly made more than €1.15 million from the web hosting service over a five-year period.

Marques was living in Ireland at the time of the offenses and used an encrypted server in France to host more than 200 websites that allowed users to upload and download child pornography. Prosecutors said that users had to submit new images of child pornography to gain access to some of Marques's websites.

At a sentencing hearing in May, prosecutors said that some of the most heinous crimes had been committed against children on websites run by Marques. They said that he was culpable for the abuse, even though he didn't commit the crimes himself.

On Tuesday, lawyers for Marques and the prosecution brought a revised deal to Maryland judge Theodore Chuang that would see the Dubliner sentenced to between 21 and 27 years in prison.

Chuang said that he would recommend to the US Bureau of Prisons that Marques receive credit for the time he served in Ireland, potentially reducing the sentence to between 13 and 19 years.

Marques will now learn his final sentence at a hearing on September 15.

Marques, who is a dual citizen of Ireland and the United States, was arrested in Dublin in August 2013 after a formal request from the US. His extradition to the US was approved in 2015, but his lawyers lodged a series of appeals against the extradition over a four-year period.

They argued that Marques should be prosecuted in Ireland, where the maximum sentence for conspiracy to advertise child pornography is 14 years.

The Director for Public Prosecutions denied the request and Marques was extradited to the United States on March 23, 2019.

His lawyers subsequently asked for a 15-year prison sentence during May's sentencing hearing, which was rejected by Judge Chuang.

They said that their client knew he was wrong and that he deserved to be punished, but they disputed the prosecution's claims that he made more than $3 million from hosting child pornography sites. They also questioned the exact number of images and videos found by prosecutors.