A group of up to 20 masked men with baseball bats broke into a repossessed Roscommon family home in the early hours of Sunday morning. 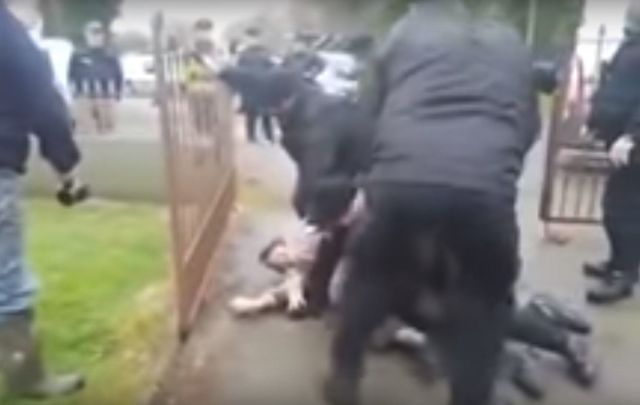 Still of elderly siblings supporters being forcibly restrained during KBC's eviction on Tuesday as the police look on. YouTube

A group of up to 50 masked men with baseball bats broke into a repossessed Roscommon family home in the early hours of Sunday morning.

One man remains in hospital after the security guards, assigned to guarding the house and farm following the eviction of its three elderly residents, were attacked by the locals.

Police plan to interview up to eight security guards, some thought to be British, who were attacked at the repossessed residence at the house and farm in Falsk, just outside the town of Strokestown. A dog was killed during the raid and at least five vehicles were burnt out.

#Breaking: A midnight-raid has taken place at a property outside Strokestown, Co Roscommon. The property, which consists of a house and farm, was taken into possession on the instructions of a financial institution on Tuesday of this week. It is unclear whether the eviction on Tuesday occurred as part of a repossession order or the appointment of a receiver.

The incident was raised in the Dáil this week, and various videos have been circulating online in relation to the event. At approximately 5 am on Sunday morning, the property was stormed by in excess of 70-people, who disembarked a number of vehicles before storming the house and farmyard.

The house has been occupied around the clock by private security contractors, who are believed to be from Northern Ireland, since Tuesday when the property was seized.

As part of the possession process, the family who are third-generation on the home farm, consisting of two elderly men (brothers) and their sister were evicted. Videos of the eviction went viral on social media on Saturday evening, receiving over 150,000 views in a period of less than 6-hours, and growing. The video depicts several uniformed men dressed in black, one who identified himself as British, removing people from the property.

Sources tell the Democrat that 6 to 7 vehicles were burned out by the anti-eviction raiders. It is understood a chainsaw was used to cut down the front door and the property was stormed from the front and back, via doors and windows. It is understood that one security-man released dogs on the raiders, but was subdued and reportedly told to leave and never “touch an elderly person in the 26-counties again”, and that the raiders knew who he was and that they would be back if the occupation of the property wasn’t ended. Reliable sources have indicated that the raiders informed the security guard that they knew his name and address before releasing him. Sources tell the Democrat that no-one was seriously inured in the incident but significant damage was caused to vehicles, with several being burned and another seriously damaged. However, it is understood that Ambulances were called to the scene, and arrived at approximately 6 am. Gardaí are also at the scene. When the raiders entered the property, many of the occupiers of the property ran-away up fields at the back of the property. It is understood that they didn’t return until the raiders left the scene. The Fire services arrived at the scene at approximately 5.40 am, before the fire could spread to the house. The entire yard was engulfed in flames, which were spreading to nearby hedges and trees when the fire services arrived. More to follow as this story develops. UPDATE: 8:30 am,Gardaí have declared the area around the property a crime scene, and it is being sealed off for investigation. Contact: editor@democrat.ie Video credit: The Democrat Pictures credit: The Democrat Video: Aftermath of mid-night raid, Strokestown.

Online many commentators urged repeat performances at other repossessed properties. This attack was spurred on by the eviction of three siblings, two brothers and one sister, all in their 60s, who were forcibly evicted on Tuesday. Footage of the eviction was posted online. The property had been in their family for generations.

The video above shows supporter of the family being forcibly wrestled into submission as police watch from a short distance away. The police stated that they could not get involved as the incident took place on private property.

The attack on the security guards, on Sunday morning, was condemned by local politicians, Fianna Fáil's Eugene Murphy, and Independent Michael Fitzmaurice. They have also been called for KBC Bank Ireland to allow the residents to return to their repossessed home.

KBC confirmed that it was aware of the incident and said it was a matter for the police. They declined to comment.

Police believe the incident took place just before 4 am on Sunday morning. The gang was highly organized. The raid involved up to 50 men many of them wearing high-vis vests and carrying bats. A number of people are said to have serious injuries to their head, arms, and legs, RTE reports. The Irish Examiner reports that there were up to 70 men involved in the raid.

Speaking in Irish parliament independent politician Michael Fitzmaurice, who represents Roscommon, criticized this forcible eviction. He said “In my opinion, many of the banks involved are scum.

“[Last Tuesday] in Co Roscommon, a group of 20 or 30 men with dogs came from the North, aided and abetted by An Garda Síochána, who blocked off two roads. The group of men pegged three people, two of whom were elderly, out of a house and left them on the side of the road.

“They were aided and abetted by An Garda Síochána [Ireland’s police], which is disgraceful.”

What do you make of this incident? Should action be taken against the banks who forcibly evicted the elderly siblings? Let us know your feelings about this case in the comments section below.