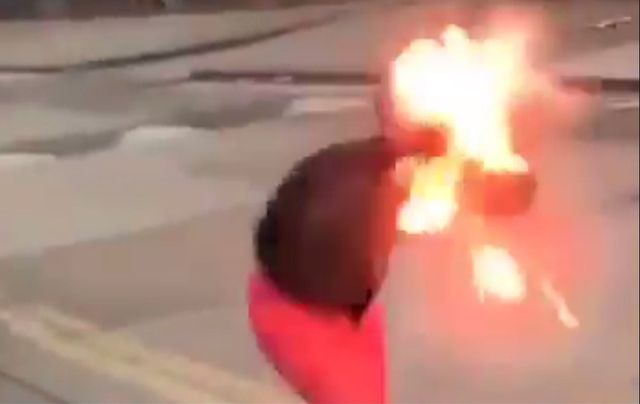 A young woman has suffered second-degree burns and hearing loss after a firework was thrown into the hood of her sweater before exploding. The incident took place last week in Dublin’s north inner-city and was captured on a cellphone camera.

The video captures a youth approaching the victim from behind and dropping the firework into the young woman’s hood. The woman runs from the group attempting to get rid of the explosive in her hood. The gang behind her, gathered on Railway Street, Dublin 1, laughs as the firework explodes.

The Irish Independent report that the young woman intends on taking the matter to the police. On social media she wrote:

"This is me in that video, 2nd degree burns, all my hair is falling out and still waiting for hearing to come back… I will be taking it further."

Police have no yet received a formal complaint but local sources say they are aware of the incident.

A source told the Independent "If a complaint is made then it will be treated as an assault and a criminal investigation would be launched."

However, a young professional woman who had been passing by at the time, told the Independent that she had told the police of the young boys throwing fireworks on Foley Street.

She said "They were throwing fireworks at anyone who went past. I rang Pearse Street garda station and told the gardai [police] that somebody was going to get hurt if they weren't stopped.

"I told them I hoped that a garda could come down and stop them before someone was set on fire. The garda responded 'fingers crossed'."

The witness said the woman’s injuries must have taken place after she placed the call to the police.

"I'm appalled that the gardai didn't step into help. Those boys were a danger to everyone near them and somebody could have been killed. I told them that this would happen but nobody came down to investigate it. I'm appalled."

Independent councillor, and former Lord Mayor of Dublin City, Christy Burke, called the incident “disgusting". He also called for a specialist police unit to be set up in the north-inner city to combat anti-social behavior.

Burke said "I'm outraged and appalled, I haven't got the words to express how I felt after seeing that video.

"That could be your daughter, your sister.

"Imagine the parents of that kid looking at that, it's disgusting.