Funeral of a violent burglar in Dublin drew widespread criticism after mourners forced their way inside the church. 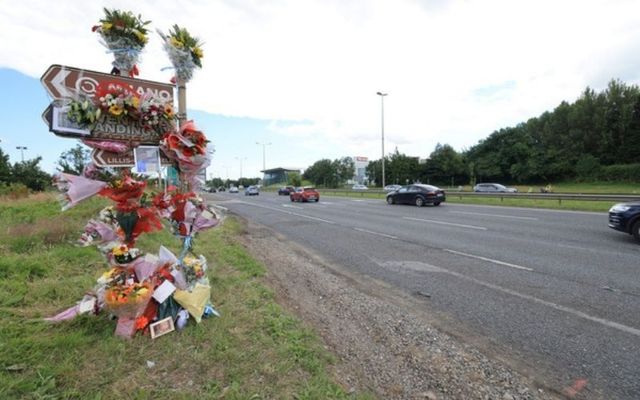 A shrine to serial burglars Dean Maguire, Carl Freeman, and Graham Taylor, who were killed while driving on the wrong side of the N7 national road in order to evade capture. Rolling News

A Dublin priest has condemned the behavior of mourners at the funeral of a serial Dublin burglar, accusing them of glorifying criminality.

Fr. Donal Roche was present but not officiating at the funeral of 29-year-old criminal Dean Maguire, who was one of three men killed when their BMW collided with a truck while traveling the wrong way down a national road at Rathcoole, County Dublin.

Mourners presented offerings of a screwdriver and torch, while others unfurled a professionally printed banner bearing Maguire's face and the caption "You know the score, get on the floor, don’t be funny, show me the money".

Fr. Roche did not conduct the funeral service but was present to ensure that COVID-19 regulations were adhered to.

In an interview with RTÉ's Liveline, the priest said that the funeral was the "most disturbing liturgy he was ever at"

In a separate interview with the Irish Times, Fr. Roche said that he was forced to lock the church as mourners disregarded Ireland's COVID-19 regulations, which permit 50 mourners at a funeral.

"People poured in at the start. I tried to lock the church and only did so with difficultly," he told the Irish Times.

He said that mourners unlocked the doors as soon as he moved away from the entrance, prompting dozens of people to stream into the church.

He said that mourners proceeded to rip off tape that had been placed on pews to ensure social distancing.

Fr. Roche additionally said that another clergyman rang An Garda Síochána for assistance but said that gardaí told them that their presence would only aggravate the situation.

He commented that the eulogies offered by friends and family were "very strange" and that no one offered prayers for the truck driver who was injured in the collision.

Meanwhile, gardaí confirmed that they are investigating video footage that appeared to show the hearse carrying Maguire's body speeding through Dublin and breaking red lights along with several other cars.

Friends of 3 men who were killed in a police chase in Dublin last week stole the hearse from the funeral of one of the men and took it on one last joyride through the city with his body still inside https://t.co/rjiM8LN5Cy pic.twitter.com/yd9Bbuu3gU

Maguire, Carl Freeman, 26, and Graham Taylor, 31, all from Tallaght, had a number of previous convictions.

Maguire was described in court as being part of a "highly sophisticated, organized crime gang" and was wanted in the UK after fleeing from prison in 2018.