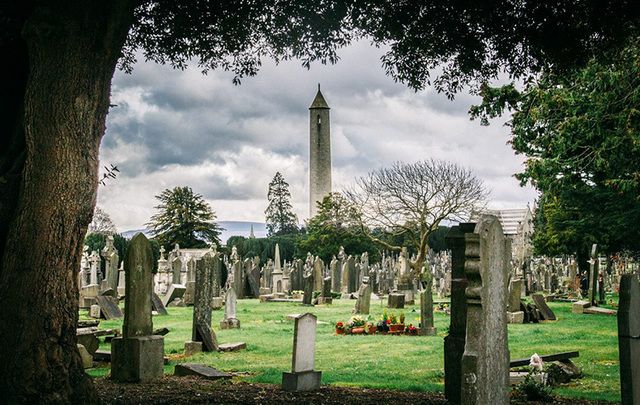 The sacred ground of Glasnevin Cemetery in Dublin. @glasnevinmuseum

A 57-year-old Dublin man has been charged with damaging the gravestone of former President of Ireland, Éamon de Valera, at historic Glasnevin Cemetery, in the north of the city.

John Moore, of Cherrymount Crescent in Clontarf, Dublin appeared before Dublin District Court and was also charged with being in possession of knives. The court was informed that the accused arrested in the north Dublin cemetery and then brought to Mountjoy Garda (Police) Station where he was questioned.

When asked about the allegations in court, he replied, “I’m guilty” to the charge of vandalism and, “It was a hammer” to the second.

He was granted bail but on the condition that he make on contact with the de Valera family and check in, three times a week, with his local police station in Clontarf.

Éamon de Valera died in 1975, aged 92, having served two full terms as President of Ireland. He was born in New York in 1882 but was sent to live with his mother’s family in Limerick as a small child.

The grave of Eamon De Valera at Glasnevin Cemetery.

He was involved in the 1916 Easter Rising and then the IRA before becoming President of Executive Council in 1932 - effectively Prime Minister of the newly independent Free State. In 1937 he drafted and passed a new Constitution, retaining office as An Taoiseach with much the same powers as he had enjoyed as President previously.

In total he served a total 16 years as Taoiseach before being elected to the ceremonial office of President of Ireland.