Westside Gym in Dublin said it was planning to stay open despite Level 5 restrictions coming into effect, but has since been forced to reverse course. 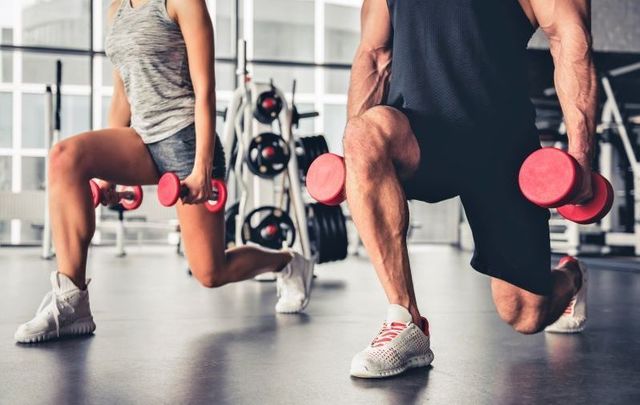 Westside Gym in Dublin said it was going to stay open for the sake of the mental health of its members. Getty Images

A Dublin gym has been forced to closed after announcing that it would defy Ireland's new COVID restrictions and remain open when the country moved to Level 5.

Westside Gym in North Dublin announced plans to remain open over the next six weeks even though gyms and leisure centers were forced to close during when Level 5 restrictions were imposed,

The gym cited the mental health of its members but has now closed after two visits from An Garda Síochána.

On October 20, the day after the Irish government announced that the country would be moving to Level 5, the gym shared a post on Instagram that read in part: "We are saddened that our government has not listened to the voice of the Irish people.

"There was not one mention of the importance of exercise in maintaining positive mental health.

"That being said, I'm sure you are wondering what we are planning to do at Westside gym. Our plan is simple, we plan to stay open."

Dearest members of the Westside Crew We know that you have been anxiously awaiting our response to last nights announcement by the Taoiseach. We are saddened that our government has not listened to the voice of the Irish people. There was not one mention of the importance of exercise in maintaining positive mental health. That being said, I'm sure you are wondering what we are planning to do at Westside gym. Our plan is simple, we plan to stay open. We did not broadcast this on social media last night and the reason for this was because we are trying to put our members first. We felt the less attention we drew to this, the longer we could stay open. We completely disagree with the government recommendations, but we felt that Westside gym would be standing alone as there are other gyms who would not join in this cause. However, we must follow our heart on this one. Ultimately, we want to do whats best for our members and their mental health. We have just reinvested again in our biggest ever upgrade here at the gym, which has already been paid in full. As a local business, We would not be in a position to freeze memberships again for a second time. Therefore, the show must go on. The doors will be open at Westside and we will be following our usual safety guidelines and procedures. If you feel personally vulnerable at these times, please stay at home. If you want to keep training, our staff will be here for you. Our 'government' have shown a total disregard for your mental health. The rising number of Covid-19 cases are NOT coming from gyms and we think it is very unfair that this has been overlooked. Dark days, dark nights and dark minds. Please mind your mental health in these times. Anything we can do to help, please let us know. Westside will remain open, alone or not, we are here for you. Kind Regards All of the Westside Team ❤ #wearewestside #westsidecrew #irishfitfam #standwithus #irishgyms #inthistogether

Owner Simon Murphy told the Irish Times on Wednesday that his members had been overwhelmingly supportive of his decision to remain open and he said that his efforts to stay open when gyms across the country were closing had nothing to do with turning a profit.

"This is for existing members only, we’re not accepting new members. It’s not a money-making exercise. It’s about being sustainable for people’s mental health and also sustaining our business," he told the Irish Times.

The gym, which has between 1,200 and 1,300 members, allows 50 people inside at any one time and has only had one confirmed case of COVID-19 since reopening in June, Murphy said.

He told any staff members who felt uncomfortable about continuing to work during the Level 5 restrictions that their job would still be there for them if they chose not to work, but he said that all of his staff supported his decision.

However, Murphy said that he would be closing the gym for the six-week period in a video posted to Instagram yesterday.

The Dublin gym owner said that the gardaí had visited the premises twice on Wednesday after he announced he would be remaining open and that he has decided to close the gym as a result.

He bemoaned a lack of support from other gyms and said that it was impossible for his gym to remain open alone.

"We weren't accepting new members, so we were no threat or consequence to any other gym," he said in the video. "We were looking for your support and I'm really at a low point to see that for the most part we didn't get it.

"There's no point fighting for a fitness industry that won't fight with you."

We are so so sorry as we feel we are letting you all down. We tried our absolute best today and we are devastated that's its come to this. The pressure that has been put on us is immense and we did not have the strength in numbers 💔