Rian Keogh was handed a bucket of copper five-cent coins amounting to €355 when he attempted to claim his final paycheck from Alfie's restaurant in Dublin. 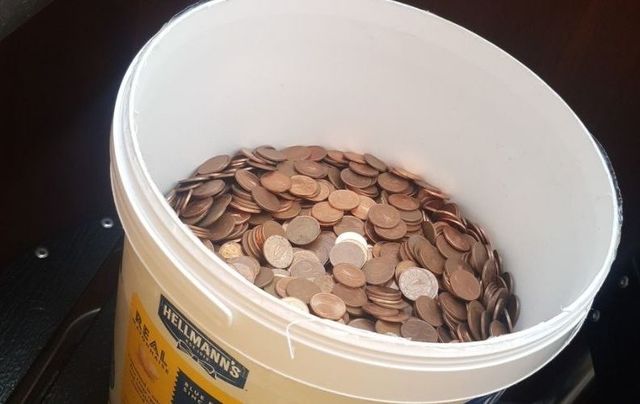 An Irish restaurant worker has gone viral after revealing that he received his final paycheck from a popular Dublin restaurant in copper coins.

Rian Keogh, who recently left his job at Alfie's Restaurant on South William Street in Dublin, was handed a bucket of copper five-cent coins amounting to €355 when he attempted to claim his final paycheck from the establishment earlier this week.

The 20-year-old student had worked at the restaurant for two months over the summer and said that he contacted Alfie's owner Niall McMahon on several occasions after handing in his notice about receiving his final paycheck.

Keogh told Joe.ie that he had to chase down McMahon for his final week's pay, with his former boss telling him that he would have to collect the money in cash from the restaurant. Keogh said that he did not give Alfie's the required notice and was left waiting as a result.

When he arrived at the South William Street establishment to collect his final salary on Tuesday, however, he was presented with a bucket of five-cent coins.

"If anyone wants to know what it was like to work in Alfie’s on South William Street just know after chasing my last pay for weeks I finally got it but in a bucket of 5c coins," Keogh wrote on Twitter.

The tweet has since been liked more than 14.5k times and has drawn more than 1,800 replies.

If anyone wants to know what it was like to work in alfies on south william street just know after chasing my last pay for weeks I finally got it but in a bucket of 5c coins. pic.twitter.com/otKhikIU5q

Keogh told Extra.ie that the bucket weighed almost 30kg and said he developed marks on his arms while carrying it home. He later shared a picture of the bucket on a scale to serve as proof:

Proof of the bucket for all the non believers too pic.twitter.com/7yCOBQRAbl

Keogh, who included screenshots of his text messages with his former boss, was supposed to receive his final paycheck on September 9 and needed the money "as soon as possible" to help pay bills. He added that he thought that he was doing McMahon a favor by agreeing to wait until September 14 to receive it but said that the bucket was the "final straw".

Under the 1998 Economic and Monetary Union Act, workers are not obliged to accept more than 50 coins in a single transaction.

The law states that "No person, other than the Central Bank of Ireland and such persons as may be designated by the Minister by order, shall be obliged to accept more than 50 coins denominated in euro or in cent in any single transaction."

Keogh said that he was not aware of the law when he was presented with a bucketload of five-cent coins.

"I thought I legally had to take it but found out through Twitter that I actually didn’t. If I had known that, I would have put up a fight," he told Extra.ie.

Keogh said that McMahon was not present when he collected the money from an "embarrassed" manager and said that he wanted to leave the restaurant as quickly as possible because he felt bad for the workers.