Dean Kerrie, 21, has been sentenced to three and a half years in prison after he stabbed and killed home intruder Jack Power, 25, in Co Waterford, in 2018. 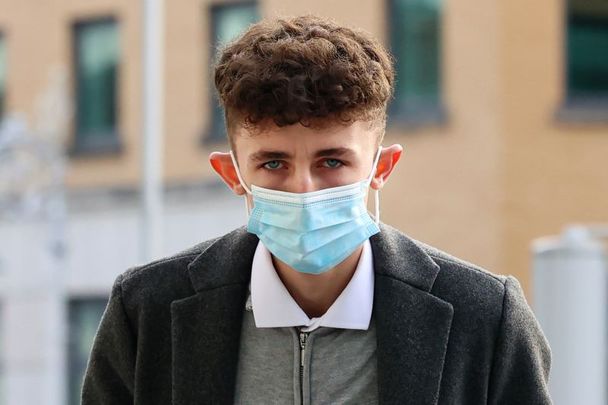 February 11, 2022: Dean Kerrie arriving at the Criminal Courts of Justice, where he is on trial accused of murdering a fisherman in Waterford when he was a teenager. Kerrie is charged with murdering 25-year-old Jack Power in Dunmore East, Co Waterford on July 26, 2018. RollingNews.ie

Kerrie, with an address now in Co Laois, was twice tried for murder but was convicted in July by a jury of manslaughter for killing Power.

McDermott imposed a sentence of four years and six months with the final year suspended for two years. The sentence is backdated to June 30 to take into account the time Kerrie has spent in custody.

McDermott took into account that Kerrie was 17 at the time of the incident, showed genuine remorse, and did not expect or instigate violence on the night of the incident.

Kerrie, who is considered a moderate risk of violent offending in the future, will be required to work with probation services and engage with anger and violence management if deemed appropriate after his release.

"I have to consider the nature of what happened that night," McDermott said on Wednesday. "The Oireachtas has recognised the special position of those obliged to defend themselves or their property from unlawful attack, particularly in their home. That is therefore a matter that has to be taken into account when considering the culpability of the accused. Those who are attacked in the home are entitled to use force and sometimes lethal force in defence of themselves and their home."

Kerrie was 17 when he stabbed and killed Power, a 25-year-old fisherman, on July 26, 2018, after Power entered Kerrie’s house in Dunmore East, Co Waterford around 3 am.

The court heard that Power, who had been drinking all day, went to Kerrie's house after believing the 17-year-old damaged his car.

Power threw a rock through Kerrie's window and entered the house. He attacked Kerrie in his bedroom and threatened Kerrie's mother.

Kerrie stabbed Power once in the chest. Power collapsed outside the house and died.

When he was arrested, Kerrie said: "He should not have come into my house. I was asleep. I heard a smash, the front window breaking.

"He grabbed my mother. He started punching and kicking her. I grabbed a knife and stabbed him with it."

In February, a Central Criminal Court Jury failed to reach a verdict on the matter, and the following month it was announced that a retrial would begin in the summer.

In July, Kerrie was acquitted of Power’s murder but was found guilty of manslaughter by a unanimous jury verdict after a retrial at the Central Criminal Court.