"There is a lot of work still to be done in the U.S. as in Ireland... for women’s equality in general and our demands for respect. It’s good to see that women are getting angry and active again this year." 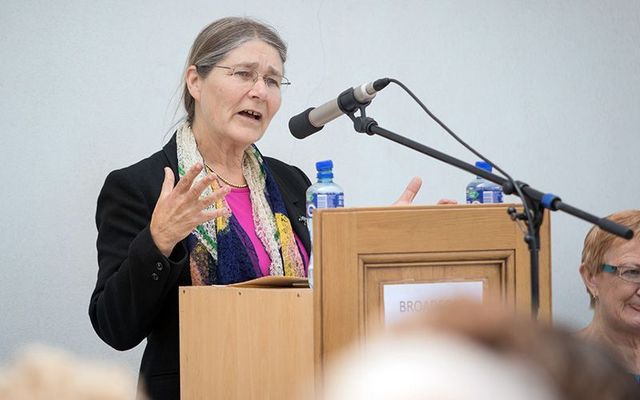 Dr. Micheline Sheehy Skeffington has spent the last few months living what may well be the ultimate Irish American experience.

It was historic and political, ambitious and timely.  And at its center was family.

“This has been a big journey for me,” Skeffington told me last week, during extensive e-mail exchanges.  Now that she has wrapped up her tour of the U.S., Skeffington added, “I have a sense of achievement and pride. I…met very many interesting people, and above all, felt supported by everyone along the way. I feel gratitude, as I was welcomed by so many different people, each with their own story to tell.”

Skeffington is a recently retired plant ecologist who was on the faculty at National University of Ireland, Galway.  She is also the granddaughter of Hanna and Francis Sheehy Skeffington, prominent Irish activists.  One hundred years ago, Hanna Skeffington toured the U.S. for over a year, speaking out on a wide range of issues from Irish freedom to the women’s vote.

Earlier this year, Skeffington decided to re-enact her grandmother’s tour, visiting U.S. cities and towns, discussing her family’s activism and its legacy.

“I addressed Irish American communities, societies and festivals as well as a division of the Ancient Order of Hibernians. This gave me insights into the peoples who hosted Hanna and built my sense of her achievement and wonder at just how much more she reached out to the communities in the cities and towns she spoke in,” said Skeffington.

“Now, back in New York City, I have a sense of really coming the full circle.  I’m staying in the Washington Square Hotel, formerly the Hotel Earle where Hanna and Owen stayed first when they sailed from Glasgow to the U.S.”

Skeffington could not have picked a more fascinating time to tour the U.S. discussing these issues.  The election of Donald Trump a year ago, and the subsequent procession of sexual abuse accusations against famous men, has led to a broader debate about the status of women in America, Ireland and around the world.

Then again, 1917, when Hanna Skeffington came to the U.S., was also a charged moment.  The suffragette movement which agitated for the women’s vote had begun hunger striking, even before the Irish nationalist movement lent prominence to this controversial tactic.

In fact, in 1917, Catholic Worker activist Dorothy Day went on hunger strike when she was imprisoned in Virginia while rallying for the women’s vote. Day “wept throughout the week while reading the Psalms,” Irish American Kate Hennessy (Day’s granddaughter) wrote in her recent book Dorothy Day: The World Will be Saved by Beauty.

Skeffington speaks often of her grandparents’ own suffragette activities, which included prison terms and hunger strikes.

One hundred years later, the Skeffingtons are inspiring a new generation of activists.

“They inspired me to take an equality case against my university (NUI Galway, Ireland) when I discovered big discrepancies in the rates of promotion of female vs. male senior lecturers. I won that case, but I’m fighting for five other women who like me should have been promoted to senior lecturer,” Skeffington said.

Next up, upon returning to Ireland, Skeffington will begin putting together a documentary on her grandparents and her tour. (Visit her website for details or to make a contribution.)

For all the progress that has been made in the last century, Skeffington added, “There is a lot of work still to be done in the U.S. as in Ireland, not just in job tenure and representation in senior positions but also for women’s equality in general and our demands for respect. It’s good to see that women are getting angry and active again this year here in the U.S.”

Read more: Rents, riots and volcanoes – Ireland on the brink of the Great Hunger