Nearly a decade and a half later the search goes on. 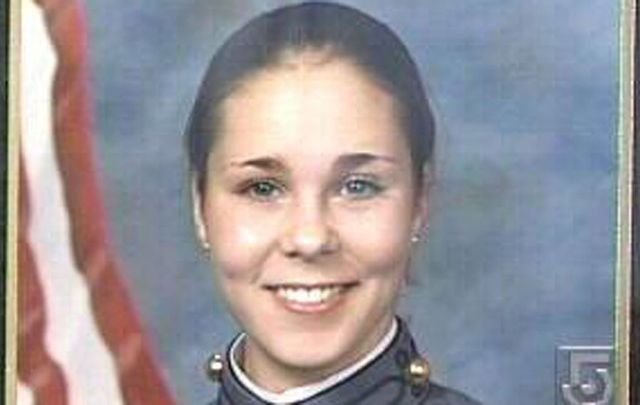 Maura Murray, a nursing student at the University of Massachusetts Amherst, was last seen on Feb. 9, 2004. Courtesy of WCVB.com

Thirteen long winters have elapsed since Irish American Maura Murray - a straight “A” nursing student - crashed her car outside a small New Hampshire town, waved away a stranger offering help, and then vanished off the face of the earth.

If it was a story written for Hollywood many would judge it too unlikely: Maura left no footprints, police sniffer dogs lost all scent within a hundred feet of her car and a heat-seeking helicopter proved useless. Search parties scoured rural New England, but not a trace of the 21-year-old student was ever found.

Nearly a decade and a half on and the case, which once dominated front pages across the United States, remains unsolved and nearly forgotten.

Forgotten, that is, except by her family who still hope that something, someday, will turn up.

“My dad’s 74,’’ her sister Julie told the Boston Globe. “I don’t want much more time to elapse without him knowing something. I want some answers for my dad’s sake. Somebody knows something. Somebody doesn’t just disappear literally without a trace. This case and my sister are in his every waking thought. It never leaves him. Thirteen years is long enough. We need some answers.’’

For her, the pain remains undulled. The pair two as close as sisters could ever be.

“We were always pushing each other,’’ Julie said. “We spent every waking moment together. She was very witty. Her SAT scores were through the roof. I always tell people that when I was a freshman at West Point, I would call back to her to help me with my homework. It’s true. Just unbelievably talented in every way.’’

Her father, Fred, still keeps the flame alive. Maura is in his thoughts within seconds of his waking up.

“The case has to stay alive,’’ he insisted. “That’s the only hope I have. I can’t help Maura now. The only thing I can do for Maura is to grab the dirt bag who grabbed her. That’s all I can do. I must find her and bring her home.’’

The last time he saw her was at dinner one Saturday in February 2004 in Amherst, MA. Two days later she withdrew $280 from her bank account, e-mailed a professor to say there had been a death in the family (there hadn’t), and she wouldn’t be in class for a while. She stopped at a liquor store and her car was found that evening at 7 pm plowed into a snowbank.

It all makes her older brother think that something must have happened to upset her.

“There are so many things that could have happened,’’ Fred Jr said. “It’s going to take someone coming forward with a piece of information to solve it and it’s probably something simple. The likely scenario is that she got picked up by someone. Maura is very smart, but she’s not street smart. She grew up in Hanson, Mass.’’

“She vanished in what seemed like a blink of an eye,’’ was the verdict of John E. Smith who worked on the case.

13 years on there are no new leads. No new information and although a support group exists when they met earlier this month they rehash what they’ve already talked about. Did the police do enough? Could this individual with a tangible connect to Maura been involved?

Despite this, the case is not closed. Not yet.

“It’s still an open case with periods of activity and [at] times it goes dormant,’’ Jeffery A. Strelzin, New Hampshire’s Senior Assistant Attorney General told the press earlier this week. “There are no new updates to share at this time.’’

A public petition for the FBI to take over the investigation has garnered 6,000 signatures on the grounds that the case was “handled improperly and since that evening things have only gotten much worse. There is much more to this case than meets the eye and the FBI is needed to bring answers to the case."

FEDERAL BUREAU of INVESTIGATION: FBI called for in the Maura Murray Missing Person Case - Sign the Pe... https://t.co/rmpbfpPmCW via @Change

Fred still works in nuclear medicine at Falmouth Hospital. Now a widower of eight years he could have retired long ago, but his work is really the only thing that keeps him from thinking about the trauma of his daughter’s disappearance.

“I wake up. It takes just a few seconds, and then it crosses my mind,’’ he said. “I’m aware. It hits me. It’s a constant pall. To tell you the truth, it really isn’t any better than it ever was.’’

On the 13th anniversary of Maura’s disappearance, the Murray family released balloons to mark the date. Tragically, it looks like they’ll be marking the anniversary in the same way for many years to come.

On the evening of February 5, 2004 Maura Murray spoke on the phone with her older sister, Kathleen, while Murray was on duty at her campus-security job at Amherst. They discussed Kathleen's relationship problems with her fiancé. Around 10:30 p.m., while still on her shift, it was reported that Murray broke down in tears. When asked what was wrong, Murray said two words: "My sister." It appears she did not share any additional explanation about the phone call or the reason for her tearful breakdown.

On Saturday, February 7, Murray's father Fred arrived in Amherst. He told investigators he and Maura went car-shopping that afternoon and later went to dinner with a friend of Murray's. Murray dropped her father off at his motel room and, borrowing his Toyota Corolla; she returned to campus to attend a dorm party.

At 2:30 am, she left the party. At 3:30 am, en route to her father's motel, she struck a guardrail on Route 9 in Hadley causing nearly $10,000 worth of damage to her father's car. The responding officer wrote an accident report, but there is no documentation of sobriety field tests being conducted. She was driven to her father's motel and stayed in his room the rest of the morning. At 4:49 am, there was a cell phone call placed to Murray's boyfriend from Fred's phone. The participants and content of the phone call are unknown.

Later Sunday morning, Fred Murray learned the damage to his vehicle would be covered by his auto insurance. He rented a car, dropped Murray off at the university, and departed for Connecticut. He would never see her again.

At 11:30 that night, Fred called Murray to remind her to obtain accident forms from the Registry of Motor Vehicles. They agreed to talk again Monday night to discuss the forms and fill out the insurance claim via phone.

Around midnight on Monday, February 9, Murray used her personal computer to search MapQuest for directions to the Berkshires and Burlington, Vermont.

At 1:00 pm Murray emailed her boyfriend: "I got your messages, but honestly, I didn't feel like talking too much to anyone, I promise to call today though.” She also made a phone call inquiring about renting a condominium in the same Bartlett, New Hampshire, condo association her family had vacationed at in the past.

At 1:24 pm, Murray emailed a work supervisor at the nursing-school faculty that she would be out of town for a week due to a death in her family. No one in her family had died. She also said she would contact them when she returned.

At 2:05 pm she called a number which provides recorded information about booking hotels in Stowe, Vermont. The call lasted approximately five minutes. At 2:18 pm, she telephoned her boyfriend and left a voice message promising him they would talk later. This call ended after one minute.

"We don't know why Maura left school... Clearly, it was her intention to leave school. Clearly, she had a destination in mind when she came up north. What clearly did not make sense was that she didn't confide in anyone."

In her car, she packed clothing, toiletries, college textbooks, and birth-control pills. When her room was searched later, campus police discovered most of her belongings packed in boxes and the art removed from the walls. It's not clear whether Murray packed them that day, but police at the time asserted she'd packed between Sunday night and Monday morning.

On top of the boxes was a printed email to Murray's boyfriend indicating trouble in their relationship. Around 3:30 pm, she drove off the campus in her black Saturn sedan.

At 3:40 pm, Murray withdrew $280 from an ATM. Closed-circuit footage showed she was alone. At a nearby liquor store, she purchased about $40 worth of alcoholic beverages, including Baileys Irish Cream, Kahlúa, vodka, and a box of Franzia wine.Footage also shows she was alone when she made that purchase.[13] At some point in the day, she also picked up accident-report forms from the Massachusetts Registry of Motor Vehicles.

Murray then left Amherst, presumably via Interstate 91 north.] She called to check her voice mail at 4:37 pm, the last recorded use of her cell phone. To date, there is no indication she had informed anyone of her destination or evidence she had chosen one.

"At a hairpin turn, she went off the road. Her car hit a tree. At that point, a person came along who was driving a bus. It was a neighbor. He asked her if she needed help. She refused. About 10 minutes later, police showed up to the scene, and Maura Murray was gone."

Some time after 7:00 pm, a Woodsville, New Hampshire resident heard a loud thump outside of her house. Through her window, she could see a car up against the snowbank along Route 112, also known as Wild Ammonoosuc Road. The car pointed west on the eastbound side of the road. She telephoned the Grafton County Sheriff's Department at 7:27 pm to report the accident.At about the same time another neighbor saw the car as well as someone walking around the vehicle. She witnessed a third neighbor pull up alongside the vehicle.

The White Mountains, did Maura somehow get lost there? Credit: William Hemmel/©New Hampshire Division of Travel and Tourism Development/Courtesy of Britannica.com

That neighbor, a school bus driver returning home, noticed the young woman was not bleeding but cold and shivering He offered to telephone for help. She asked him not to call the police (one police report says "pleaded"]) and assured him she'd already called AAA.(AAA has no record of any such call.)

Knowing there was no cell-phone reception in the area, the bus driver continued home and called the police. His call was received by the Sheriff's Department at 7:43 pm. He was unable to see Murray's car while he made the phone call but did notice several cars pass on the road before the police arrived.

At 7:46 pm, a Haverhill police officer arrived at the scene. No one was inside or around the car. Maura Murray had disappeared ]

At 8:00 to 8:30 pm, a contractor returning home from Franconia saw a young person moving quickly on foot eastbound on Route 112 about 4 to 5 miles (6 to 8 km) east of where Murray's vehicle was discovered. He noted that the young person was wearing jeans, a dark coat, and a light-colored hood. He didn't report it to police immediately due to his own confusion of dates, only discovering three months later (when reviewing his work records) that he'd spotted the young person the same night Murray disappeared.

She has never been seen since. Was she abducted? Did she leave to start a new life? Did she die from exposure in the mountains? Was it a suicide? No one knows.