Miracle Dublin child, stricken with cancer, makes it to her confirmation

Robyn Smyth, now 12, has been battling cancer since she was three years old. 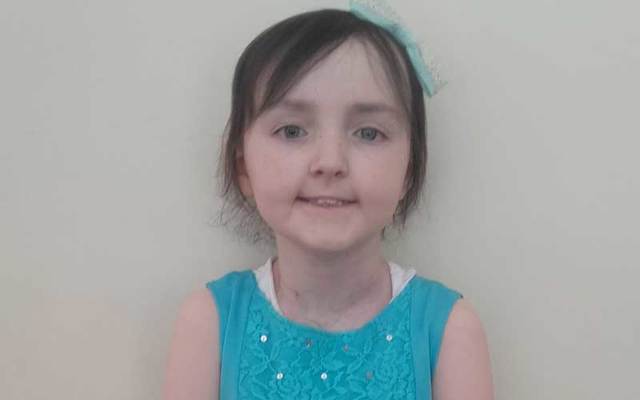 Robyn Smyth, 12, who has been battling the cancer neuroblastoma since the age of three, made her Confirmation on Friday.

It was a day a family hoped for but never thought they would see.

A delighted Robyn Smyth, 12, who has been battling the cancer neuroblastoma since the age of three, made her Confirmation on Friday.

Next up is more treatment in America where despite enormous expenses her family is determined she will have.

The little girl was given little chance of surviving when she was first diagnosed. At the time, her Mum Bernadette, discovered a lump on her face and a scan showed it was a tumor that had protruded through her jaw bone.

With a proud smile on her face, Robyn joined around 40 other children at Whitehall Church in Dublin.

Robyn’s emotional Mum has been hoping for months that plucky Robyn would be well enough to celebrate the day as she has been dangerously ill this year.

“It’s absolutely amazing we made it this far, earlier this year Robyn was very ill and we were extremely worried. But my little girl has the ability, thankfully, to just bounce back,” explained Bernadette.

“Her Confirmation day is a real milestone. We had a big, big celebration for her First Holy Communion as we were fearful she wouldn’t make it but Friday was really beyond words.”

There was however, some drama at Smyth home this week which caused a lot of stress for Bernadette.

“Robyn has started loosing her hair again from the chemotherapy and it started falling out mostly at the back of her head. I was hoping all week Robyn wouldn’t notice and she didn’t thankfully. She would have been devastated having no hair as she really wanted to have some for her confirmation.

She said to me she didn’t care what she wore by telling me,’I don’t care, I just want hair.’”

Once the religious ceremony was over on Friday, Robyn went to the restaurant, Nando's and to the movies, which she was thrilled with.

Following years of treatment, the young girl entered remission, but it returned in 2013 and at various times since with the cancer showing up in her spine, pelvis and legs.

It was when the Dublin girl’s chances of survival dropped to five per cent that her family decided to fundraise to take her to the US and Helen DeVos Children’s Hospital in Michigan but so far it’s cost hundreds and thousands of euro.

Reality hits on Monday as Robyn and her Mum will travel back to Michigan for more tests and treatment yet again. “It’s never ending and the joy can be so short lived. But this is part of our lives. We try to stay in the US for as short a time as possible, usually a week if we can get away with it.

“It’s tough on all the family but we will never give up on Robyn. The doctors constantly keep telling us, if we get another year and a half we will be doing well and we live our lives like that.”

Bernadette revealed that Robyn’s five-year-old sister Millie knows that Robyn is very ill. “(Millie) is always sad when they have to part when Robyn needs to travel from home to get treatment in her fight against cancer.

“With a little help, Millie has made her own activity book called ‘Robyn and Millie’s Playtime Activity Book’ so they can still enjoy and share in activities even while apart. Millie looks up to her sister.

But Bernadette is fearful of the day that Robyn may no longer be with them. “Everyone knows the medical and transport costs are enormous and for nine years people have been tirelessly fundraising for Robyn and their kindness is beyond words.

“However, our funds are now dangerously low and being brutal about it, without the money to meet these medical costs, Robyn won’t have any chance of continuing treatment and we all know what that means for her,” Bernadette added.