Katie Talpa and Holly Lloyd Peate from Swords in Co Dublin hope to represent Ireland at the 2024 Olympic Games in Paris when breakdancing makes its debut. 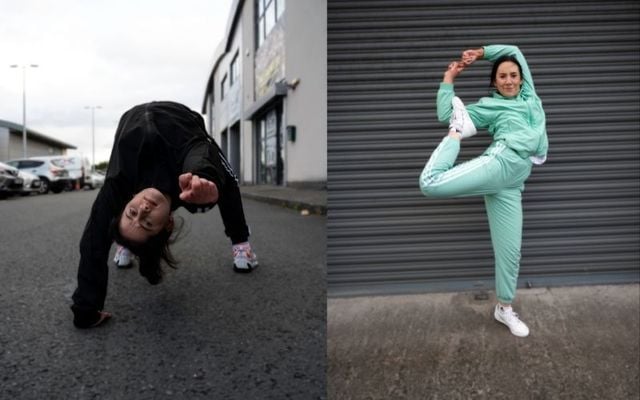 Two Irish teenagers hope to represent Ireland in breakdancing at the 2024 Olympic Games when the sport makes its debut in Paris.

Katie Talpa, 18, and Holly Lloyd Peate, 16, from Swords in County Dublin, recently took first and second place at the first-ever official breakdancing event in Ireland at the beginning of May and are now setting their sights on the Olympics in three years.

Referred to as "Breaking", the sport will make its debut at the 2024 games alongside skateboarding and climbing as the International Olympic Committee (IOC) looks to place a strong emphasis on youth.

Talpa and Peate, who represent the House of Swag Dance Studio in Dublin, will now travel to Sochi, Russia, for the European Breaking Championships and victory will seal their place at the Paris Games.

Both will be competing as individuals and will first take part in a preliminary competition where each dancer has roughly one minute to impress a panel of judges, who will select eight contestants to

For Talpa and Peate, the upcoming European Championships will be one of many opportunities over the next three years to book their ticket to Paris.

"We're trying to compete in a lot of championships and get ourselves out there on the road to the Olympics," Holly Lloyd Peate told IrishCentral.

Both Talpa and Peate hope to compete in the Breaking category at the World Urban Games in Budapest later this year as they continue along the path to the Olympics.

Talpa and Peate have both been dancing for several years but only switched to breakdancing around two years ago. It has been their passion ever since.

They both train for roughly 35 hours every week, balancing their newfound passion with the demands of secondary school.

Both dancers go straight from school to their studio on weekdays, while they also go for morning runs throughout the week. On weekends, they both spend almost every waking minute perfecting their routines and learning new skills.

Peate believes that the immense dedication is a matter of priorities.

"It's really all about priorities. If you want to fit it in, you can," she said.

The COVID-19 pandemic brought about another set of challenges as Peate and Talpa were forced to find alternative ways to practice at home while Ireland was in Level 5 lockdown.

That usually meant attending practice sessions through Zoom, which didn't have the same impact as training in a dance studio.

"We had to train at home the last few months. It's kind of hard because you're not around anyone and you're by yourself," Peate said. "You can learn different styles from each other, but you need to be around other dancers to practice. You can only be so good by yourself."

However, the two dancers are now dancing in a studio once again and are looking ahead to the European Breaking Championships in a month's time.

They are competing in a male-dominated sport but are hoping to inspire more girls to become involved by blazing a trail through international competitions.