Irish President Michael D. Higgins draws parallels between the story of the birth of Christ and the current refugee crisis. 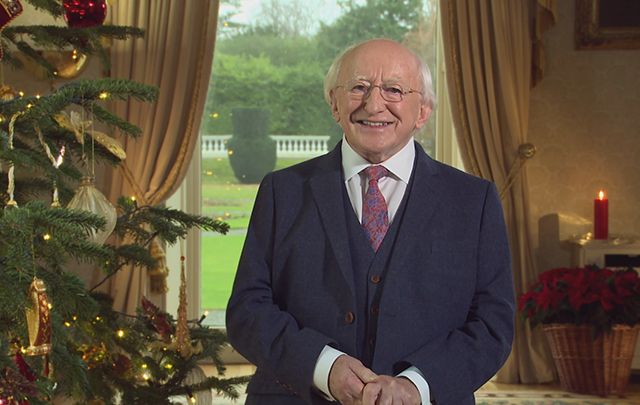 Irish President Michael D. Higgins highlights the plight of refugees and the homeless in his Christmas and New Year address to the people of Ireland. Speaking from his residence at Áras an Uachtaráin in Phoenix Park, Dublin, President Higgins reflects on the parallels between the displacement of refugees and the homeless in Ireland and abroad in 2016, and the nativity story which saw a child born in a stable after his parents were forced to leave their home.

“The Christmas period is a special period for all of us,” Higgins said.

“It is a time of celebrations, of closeness and of hope. A time, too, to focus on the message contained in the story of a child in the manger, born to parents without a home, and reliant on the hospitality of strangers.

“This story should resonate to us in our present world and circumstances, holding as it does a message for all of us, regardless of our circumstances or faith: A message of challenge to moral action, one of optimism in our capacities for a new beginning, and it is a message of peace.”

“The circumstances of the birth of Christ, with its forced migration, homelessness, and powerlessness, are being re-enacted for us the world over, in the conditions of migrants - including infants and children - as they wait, not knowing what the future will hold for them,” he continued, drawing attention, in particular, to the violence in countries such as Syria, Yemen and Iraq, and to the European cities devastated by terrorist attacks this year, including Istanbul, Nice and Brussels.

As we draw to the close of the 1916 Easter Rising centenary year, President Higgin also wished to reflect on the year of commemorations throughout Ireland and the world and what this means for the country now and in the future as we learn more about what is means to have achieved freedom, while remembering all aspects of our own history.

“In the past year, a special year of commemoration and reflection, we have been reminded of how precious our freedom is,” he said.

“We commemorated how one hundred years ago a small group of women and men set in train a series of events that ultimately led to an independent State. In doing so, we celebrated elements of our past that can provide us with a lasting source of pride and confidence, as well as a compass for the future. We also reflected on aspects of our history that had been forgotten, evaded or even downplayed.

“My wish, at this Christmas of 2016, is that, together, we will continue to seek to build the true republic of which our forebears dreamt, embracing the values, possibilities, and responsibilities contained in that dream,” Higgins added.

In the year when the Brexit referendum decided the UK’s departure from the EU amid much division and the US also stands divided over the election of Donald Trump as President, Higgins is optimistic that these divisions can be overcome, and speaks of his belief in the ability of the Irish people and the world to overcome the uncertainty we face looking into 2017.

“As we now face into a new year we are challenged to embrace the new,” he said.

“We need courage to depart from what has not served us well, and we need the inspiration to make new connections with each other and with the vulnerable planet on which we live.

“Nelson Mandela and Archbishop Tutu reminded us that 'A person is a person through other people'. This fundamental awareness of the importance of our love for – and dependence on – each other should inform all our plans and actions, and should give us the wisdom to generate new models and new policies that will ensure inclusive action at home and abroad,” Higgins added.

“Our solidarity is the heartbeat of our society. Our bonds are stronger than we think and stronger than that which at times divides us. The complex world in which we live challenges us, but it does not pose greater challenges than those faced and overcome by previous generations, or by brave movements of the oppressed in world history.”

You can watch the President’s full message below: